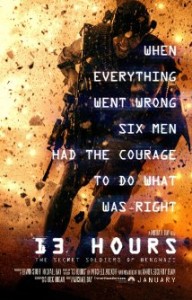 Michael Bay has taken a break from the Transformers and has turned to the true story of what happened during the Benghazi attacks. John Krasinski (The Office) leads the pack as Jack Silva, a former Navy SEAL who joins a group of CIA contractors in Benghazi, Libya. There is a classified diplomatic compound and a CIA Annex on site, but Silva along with other members of his team realize that these outposts don’t have the security detail that they should. On September 11, 2012, the compound and Annex came under attack by local Islamic militia groups. The six soldiers decide to take matters into their own hands by defying orders and entering the compound to rescue a U.S. Ambassador (Letscher) and the staff that are holed up within it’s the walls.

Director Michael Bay is no stranger at blowing things up. He’s the man behind four too many Transformers movies, The Rock, and Armageddon, just to name a few. I’ve grown to really detest a majority of what he puts out these days. I went into 13 Hours: The Secret Soldiers of Benghazi with an open mind, but a little reserved at the same time. He sets the stage by showing some real news footage of the time to show what was happening in Libya with the overthrow of Gadaffi and it’s not too long before the attacks are underway. There is great usage of the “shaky cam” style to put you right in the middle of the action. This choice along with some of the more brutal and bloody aftermath scenes may be too much for some moviegoers too handle. There was a medical emergency at the screening I went to the other night. The tight shots are fine and all, but Bay and cinematographer Dion Beebe are more effective when they use wide shots and even some aerial shots. Fear really starts to set in when you can get a better picture of the area and just how many terrorists are attempting to break into the compound.

Yes, there’s the shaky cam, but in true Bay style he falls back on his slow-mo action shots to make it dramatic. Bay needs to work on trusting his material enough to let it speak for itself. There’s also a very standard patriotic type of score that plays on top of these moments. This all leads to Bay making it melodramatic when he shouldn’t be.

I tend to think his movies are far too long and was a little apprehensive about the two hour and twenty minute runtime of this film. Surprisingly enough it actually doesn’t feel that long at all. While it doesn’t work for Transformers, the time felt justified here. Bay seems to pay his respect to the soldiers by giving the key moments of the attacks their due time without it seeming like it’s rushing over what all happened.

I may be ripping on Bay too much as this is actual a pretty decent film. He doesn’t always rely on his same old tricks. Even though it’s pretty go, go, go right from the beginning, he knows how to counter that and play the quieter scenes in between the attacks. We learn more about the soldiers’ home lives and the families they are leaving behind. Many of the men are seen having Skype sessions with their wives and children and also shows their perspective. We see what it’s like for Silva’s wife to juggle the kids, the carpool, and the stress of having another child on the way. The film also doesn’t play on the politics behind Benghazi. There are no references to Hilary Clinton, President Obama or any of the aftermath that followed. The film focuses on giving that first hand account from the soldiers that were in the middle of it. Many of the actual soldiers were involved in the making of the movie as it’s based on their book of the same name.

This is by far Michael Bay’s best film since 2001’s Pearl Harbor. John Krasinski leaves his comedic side behind and plays everything very straight faced. As Kris ‘Tanto’ Paronto, Pablo Schreiber (Orange is the New Black) gets to be the funny one as he is the goofball of the group whose sense of humor isn’t always well received. David Denman (Parenthood), James Badge Dale (The Walk), Dominic Fumusa (Nurse Jackie), Toby Stephens (Die Another Day) and Max Martini (Captain Phillips) make up the rest of the team. Hopefully people will see this film as something beyond just “another Michael Bay blow ‘em up” kind of film. It’s a frightening true story that will hopefully have people researching more about what happened. Given the presidential season approaching, this won’t be the last time we are reminded of the Benghazi attacks.

Is It Worth Your Trip to the Movies? I forgot that Michael Bay could actually make a good movie.