Movie Review: A WALK IN THE WOODS 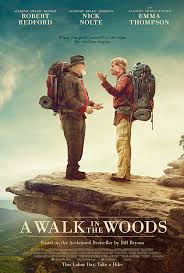 If you saw the book cover for “A Walk in the Woods” you would probably recognize it as it’s one of those popular books that makes it on a bestseller list, people are reading it on the bus, or you may see it for free in a donation pile. It has a cute bear on the bottom half of the cover. It’s author, Bill Bryson (Redford), was known as a travel writer with this book tackling his trek on the Appalachian Trail. He was in his forties when he felt a calling after a friend’s funeral to hike 2118 miles of the trail. His wife, Catherine (Thompson), thinks he is out of his mind for wanting to do this and leaves little notes behind with articles about people dying along the way. The not-so-subtle hints do not deter him. If he must go, she would rather have him go with someone else. An answering machine full of messages from potential hiking partners is just additional proof to confirm that Bill has lost it.

Long lost friend Katz (Nolte) comes a calling when he hears second hand that Bill is looking for a buddy. If Bill is the friend that succeeded in life with a family and job, Katz is the opposite. Katz is the Oscar to Bill’s Felix. Their opposite lifestyles come into play on those long days on the trail. Katz starts huffing and puffing a quarter of a mile into the trip, but Bill is determined to keep going no matter what elements, people, or animals may get in their way.

I have never read the book but went in thinking it would be this year’s Wild. I assumed it would be another inspirational type of movie where the characters are going through some sort of self-discovery phase of their life. It seems like the introductory scenes of the film set up this idea as Redford’s character is determined to hike the trail. He won’t listen to his wife and has that stubborn old man vibe. The screenplay is by Rick Kerb and Bill Holderman who are both making their feature film debut with this script. I wish they had spent more time on why Bill was making this choice. There also needed to be more explanation regarding the history behind the characters’ friendship. They’ve known each other for years, but we only get that standard “photo album” scene to explain their past. A few stories are traded throughout their journey on the trail, but most of their banter consists of surface level dialogue. Maybe this was the tone of the book and they wanted to honor that by keeping the whole movie light and jovial. There’s no real deep meaning or substance behind their journey. A majority of the humor feels forced into each scene catering around the idea of two old guys out of their element walking around the woods next to a bunch of seasoned hikers. Sorry, but it gets repetitive after awhile.

A Walk in the Woods has been in the works for many years and was originally meant to reteam Redford with Paul Newman. Nolte is a good substitute for Newman, and there’s something fun about watching these veterans go at it. In real life, both men were in their early forties when they hiked it even though Redford and Nolte are in their seventies. I feel like this story has a different meaning for people in those age ranges. Redford has been on a roll lately getting high praise for 2014’s All is Lost. He starred in last year’s Captain America: The Winter Soldier, and he’ll play Dan Rather later this year in Truth. You can tell Nolte is having a grand old time with his character. He really lets himself go with his bird’s nest of a hairstyle and a voice so gravelly it sounds like it hurts. Has he always sounded like this or was it a character choice? As Redford’s wife, Emma Thompson brings so much emotion to the small and standard role of disapproving wife. Her scenes bookend the movie, but they were some of my favorites. I could watch her read the phone book. Mary Steenburgen, Nick Offerman, and Kristen Schaal pop up for minor roles along the way.

This was not the movie I had expected it to be. It’s not a survival guide or religious journey. Maybe if I had read the book, I would have been more prepared as to what to expect. There’s more potential here than what is brought forth. Director Ken Kwapis is known for movies like He’s Just Not That Into You, The Sisterhood of the Traveling Pants, and various sitcoms. He knows how to bring out the laughs even if I wasn’t laughing very hard. The rest of the audience was really laughing it up throughout the whole movie, but they were the film’s target audience which is meant for an older demographic. Unfortunately, I don’t think this is strong enough to inspire anyone younger. On a side note, I’m still unclear why it has an R rating. There is minimal language and some sexual humor, but that’s expected from these two and it should be a soft PG-13 at most.

Is It Worth Your Trip to the Movies? I’d rather watch Grumpy Old Men or an old Redford classic instead.