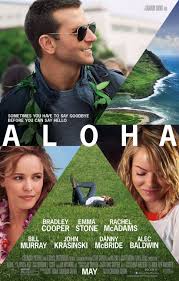 Hawaii provides a picturesque backdrop and cultural lesson in the latest film from writer/director Cameron Crowe (Say Anything, Jerry Maguire, Almost Famous). Bradley Cooper leads an A-list cast as Brian Gilcrest, a military contractor who arrives at an Air Force base in Honolulu. He is tasked with getting the blessing from local citizens to build a gate and launch a weapons satellite. Upon arrival on the base, it’s a reunion for Brian and his ex-girlfriend Tracy (McAdams) who haven’t seen each other in thirteen years. She has since moved on, gotten married, and started a family, but there still is chemistry between them. To complicate matters, sparks start to fly between Brian and Allison (Stone), the air force pilot who’s assigned to watch him while he’s back. She’s a high-energy spitfire who loves Hawaii and takes her job very seriously.

We come to expect a fantastic script from Crowe, so it becomes all the more evident when he starts to falter. There’s a lot going on in the plot between the Hawaii influences, weapons satellites, the Air Force lifestyle, and the love triangle. The story gets a bit muddy on where it’s ultimately going. The scenes with Cooper’s character trying to do his job as a military contractor seemed to derail the most. It never seemed fully realized in clear detail about what his mission was regarding the blessing and the various impacts it would have on the natives of this land versus what the air force was trying to accomplish. There is a choppy feeling in the editing as many scenes felt like they should have been longer. It made me question if this movie was originally a lot longer and then got paired down to fix its shortcomings. I kept wondering if I was missing something. Something wasn’t clicking with these side plots.

He feels more at home and natural when it comes to the main story involving the love triangle. Crowe can be a genius with dialogue in these types of situations. There are many quotable lines in many of his movies that not only standout, but have ended up getting used in our lexicon since their release. There is his traditional use of short one-sentence declarations of our character’s inner feelings. None of them here really stand out or have that same punch as “You had me at hello”, “I am a golden god”, or “I gave her my heart. She gave me a pen.” He may not have any new killer one-liners, but what struck me this time was that he seems to be playing more with the unspoken emotion. The audience is left to fill in the gaps about the past relationship between McAdams and Cooper. Both actors are on point with giving us this detail when Crowe decides to let the body language and silence speak for his usual banter. Part of that is also helped out by John Krasinski’s character. He’s playing the husband to Rachel McAdams and he’s a man of very few words. Cooper tries to translate a whole a conversation between the two of them to McAdams based off a few Krasinski head nods.

Even with a script that needs focus, he’s rounded out this superb cast that keeps you invested in this story. Joining Cooper, McAdams, Stone, and Krasinski, are Bill Murray, Alec Baldwin, and Danny McBride in smaller supporting roles. Everyone feels very comfortable and at ease with their roles. We’ve seen Cooper, McAdams, and Stone do many romantic comedies in the past. All three are fantastic actors that can really bring out the truth in each scene. McAdams and Cooper were previously in Wedding Crashers together and they have good chemistry together here. Bill Murray is playing a very Murray-esque type character as the eccentric and unpredictable man behind the satellite launch. I got the impression that Crowe just let him play on set giving him free reign to improv his way through many scenes. He’s his usual funny self in that loose cannon style he can easily do. Crowe previously worked with Alec Baldwin in Elizabethtown, and his hot-tempered role as a Air Force officer seems tailor-made for the actor.

I concur with the testament that some of Crowe’s recent films have not had the strength of his earlier work. Aloha may not be of that caliber either, but that doesn’t make it a horrible movie. It’s evident Crowe has an affinity for Hawaii. You can feel it in the cinematography, the music, and the reflections on the culture. Jónsi was his music supervisor on We Bought a Zoo and returns here with another wonderful soundtrack with certain songs perfectly fitting the mood. I may have a soft spot for Crowe, but Aloha has enough going for it to offset some of those questionable moments when you want him to reign it back in. It’s still better than most rom-coms that grace the silver screen, and per typical Crowe fashion, it has that feel-good ending he always does so well with some humor and schmaltz mixed together.

Is It Worth Your Trip to the Movies? While it may not be as good as other Crowe films, it’s a good date night movie for those that want a quieter night out at the movies over some loud summer action movie.