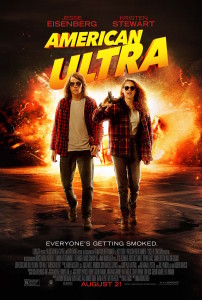 “Well…that was something.” Those were the precise words I said to another critic as the lights came up on American Ultra. I only watched the trailer once so I knew very little going in as to what to expect. I knew the actors and the idea of it being this stoner comedy/action type of movie. There’s potential there, as we’ve seen movies of this genre smash before. Pineapple Express and Edgar Wright’s Cornetto Trilogy are good example to show that you can do a mash-up of vastly different genres. That being said, it’s tricky to get the tone right and not fall off the rails. Boy, does American Ultra go off the rails and not in the good way.

Jesse Eisenberg and Kristen Stewart play Mike and Phoebe, a dysfunctional couple who don’t really have their acts together. He suffers from panic attacks and spends his days barely working at a convenience store. His constant state of being high probably doesn’t help matters. One day one of his customers (Britton) starts talking in code to him as if he understands her secret messages. He’s completely oblivious and has no idea that she is a CIA agent. It gets even stranger for Mike when he notices his car being vandalized outside the store. For thirty seconds, he is overcome with some super power and suddenly kills them without even realizing it. He is beyond confused about what is happening and finds out he is a target for assassination from the CIA.

Sounds funny, right? Maybe semi-funny. The movie starts out with the potential for it to be a dark and twisted comedy. Eisenberg’s character is put in a pretty ridiculous position, and he has no recollection of how he was given this special strength for kicking butt. Instead of going along for the ride, I found myself asking more and more questions trying to get to the bottom of what I was watching in front of me. I questioned if it was based a graphic novel due to the concept and the lavish blood splatter given to the various death scenes. It’s not, but I do admire the fact that this is a completely original script. Those can be a rare find in a summer full of franchises, blockbusters, and YA adaptations. Max Landis, who also wrote Chronicle, penned the script and shows no restraint in where the story is going. It made me question if he came up with the idea while super high on a special highly potent marijuana blend. Only someone that out of it could come up with this government conspiracy theory type of plot.

There are major inconsistencies as to what kind of movie it wants to be. The humor dies down pretty early, so I’d barely even consider it a comedy. It shifts to being more of violent action movie. Who’s to blame? Landis or director Nima Nourizadeh (Project X)? Both have very limited credits to there name. The tone is not helped by the acting choices Nourizadeh gets from Eisenberg and Stewart. They seem to be playing it too seriously instead of being in on the joke. One of the main reasons why Pineapple Express and the Edgar Wright films work is that they have comedic actors in the lead. Eisenberg and Stewart aren’t known for their funny bones and this leads to contradictory styles compared to Topher Grace, John Leguizamo, and Walter Goggins who all play up the camp and absurdity of the story. Last but not least is Connie Britton whom I love and adore. She was one of the more tolerable aspects of the movie, but I’m still confused as to why she signed up for this. Again, am I missing something? Maybe she was pulling in a favor for someone.

If you couldn’t already tell, I came out of American Ultra disgruntled and confused. I acknowledge that there is an appeal here. It garnered some laughs throughout from a minor part of the audience. I was not one of them. It reminded me of my initial thoughts coming out of Chappie. Both films have a decent cast and an interesting premise but neither have a strong sense where they want to go and how they want to get there. I’m all for an “out there” concept, but they need strong and consistent execution for this kind of vision. It’s a bummer that can’t be said for American Ultra.

Is It Worth Your Trip to the Movies? I’d rather watch one of the Twilight movies.