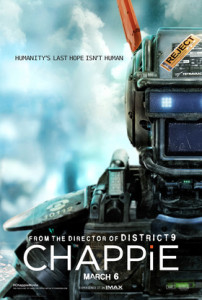 Haven’t we already seen Hugh Jackman in movie about robots? Yes, but this isn’t a sequel to Real Steel. In a futuristic society, the world’s first robotic police force has been established with great success. The robots are referred to as “scouts” and business is booming! Tetravaal CEO Michelle Bradley (Weaver) wants to cut the budget for additional weapons and programs in order to maintain their profit growth. Their inventor, Deon Wilson (Patel), is on the verge of creating an artificial intelligence program to be used on the robots. Michelle is not too keen on his latest development and sees it as a huge insurance risk. His rival, Vincent Moore (Jackman), also works at Tetravaal as a weapons inventor and has it out for Deon as his project “The Moose” is not getting the attention it deserves.

Deon steals a broken robot from the warehouse so he can take it back to his apartment and test out his A.I. program. He doesn’t make it very far when he is carjacked and kidnapped by a gang of drug lords. These drug lords have hunted him down as a way to stop the scouts once and for all. They feel that since he is their maker, he is the ultimate source to shut down the project. A previous drug bust was thwarted when the scouts came crashing down on them. When Deon is forced to give the broken scout the A.I. program, it comes alive and is given the name “Chappie” by Yolandi (Visser) who thinks of herself as it’s mommy while Deon is it’s daddy. Deon and Yolandi attempt to teach Chappie (Copley) how to speak, how to behave, and how to paint. Unfortunately, Yolandi’s boyfriend, Ninja, teaches it how to swear, have a gangster attitude, and how to steal sports cars. Deon’s problems continue to escalate when Tetravaal is compromised by one of their own and all of the scouts are turned offline and anarchy hits the streets.

There was a bolt of energy that I didn’t expect when the movie started. We are quickly introduced to the three main characters played by Patel, Jackman, and Weaver. There is breaking news footage by Anderson Cooper covering the scouts’ affects on crime. Hans Zimmer’s synth score has a drive and focus to it to keep the pulse beating at a brisk tempo. To be frank, there were many times were I wanted to turn off the dialogue and other sounds and just hear an isolated track of the score. There was no slow approach to an exposition or mindless dialogue between dopey characters. I felt like I was bolted in and ready for a fast paced original sci-fi action flick. Instead of keeping this adrenaline rush, director Neill Blomkamp, who co-wrote the film with Terri Tatchell, manages to go off the deep end by resorting to clichés, continual obnoxious behavior, and deplorable characters. There was nothing redeemable about Hugh Jackman’s character. Sigourney Weaver is an extremely gifted and ass-kicking actress who is, yet again, wasted by playing the greedy CEO. Much like last year’s film Exodus: Gods and Kings, she is only given a handle of scenes and is not given any decent material.

There is something sweet and child-like about Chappie when he first comes to life thanks to Sharlto Copley’s (District 9) wonderful performance through motion capture. You want to root for him and watch him grow with the help of Deon and Yolandi, even though she’s a bit nuts. This all goes to hell in a hand basket once he’s manipulated. Do you remember the scene in Edward Scissorhands when Anthony Michael Hall takes Edward and makes him rob the house? I always felt so sorry for Edward and felt uncomfortable for what he was being put through. That’s how I felt throughout a majority of this film.

The film continues to escalate into madness that leads up to a completely over-the-top final act. It’s a violent ending, to say the least, that reaffirms it’s hard R rating. I want to warn any parents that this is NOT by any means a kid’s movie. Don’t think that just because it has what appears to be a happy innocent robot in it that we have a reboot of Short Circuit on our hands. There was a five year old sitting next to me at the screening I went to and I was truly baffled and appalled that these parents brought their two young kids to a movie so inappropriate for their age. The girl had to cover her eyes throughout a majority of the ending.

Director Neill Blomkamp became an artist to watch after his first film District 9 received critical acclaim. He then followed that up with Matt Damon in Elysium, which completely tanked. I think audiences were hoping he would get back on target here and prove he is more than a one-hit wonder. After Chappie, I am not yet sold. Blomkamp seems to think he has this unique premise, but by the end of the film, the take away is that it’s never a good idea when our technology outsmarts us. When we start giving consciousness to robots or machines, we should just expect disaster to follow. We have seen so many movies recently (RoboCop, Transcendence) about this very concept, and it’s tricky to get it right. I didn’t feel like Chappie told this story in a new or interesting way. Blomkamp is apparently taking over the Alien franchise by bringing back Weaver and her iconic character. I am skeptical, but will give him one more chance to prove himself.

Is It Worth Your Trip to the Movies? The first fifteen minutes are GREAT, the rest is beyond frustrating.