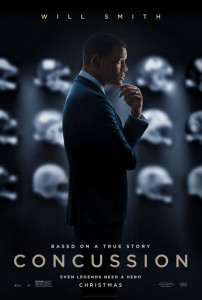 I’ll be upfront about my knowledge of football. I know very little. My background comes through the television show Friday Night Lights and other football movies. The NFL did not have a good year after the Ray Rice incident, the Adrian Peterson incident, and Tom Brady’s Deflategate. Now comes Concussion to further cement the negative aspects of the organization that tend to get covered up. Dr. Bennett Omalu (Smith) is a forensic pathologist originally from Nigeria who now lives in Pittsburgh. He holds multiple master’s degrees and certificates. He treats his bodies with respect and even talks to them. He has a very positive outlook on life and believes in the American dream.

His latest body is that of former Pittsburgh Steeler Mike Webster (Morse). He was found dead in his car, but suffered from severe mental health issues due to the brain trauma he received from his time in the NFL. Dr. Omalu diagnoses him with chronic traumatic encephalopathy (CTE) and determines that “playing football killed Mike Webster.” He continues to see repeated patterns after multiple Pittsburgh Steelers are found dead due to suicide. He decides to write a paper based on his findings about brain trauma due to playing football. He attempts to confront newly appointed NFL commissioner Roger Goodell (Wilson) about his findings. Instead of listening to him, they quickly dismiss and threaten him for attempting to smear the NFL’s holy name.

Concussion is based on a true story as first told through the article “Game Brain” by Jeanne Marie Laskas in GQ. Writer and director Peter Landesman (Parkland) pulls no punches and doesn’t try to sugarcoat the truth by using fake team names and profiles. Like the film’s subject matter, he isn’t afraid of the NFL. This isn’t one of those “loosely inspired by real events” types of films. Do I believe that there are some dramatic licenses taken? Of course. It feels more dramatic than it needs to be with some of the heated arguments and the repeated attempts at showing the tackles and number of victims in order to drive home its point. It feels vague about how much time passes throughout. Landesman decides to add in the love story between Dr. Omalu and Prema Mutiso (Mbatha-Raw). She was a member of the church he went to and soon became his roommate. After living together, they fell in love, got married, and had children. I’m a bit conflicted with this subplot as it feels a bit forced and unnecessary at times, but later provides a look at how the NFL’s attack on Omalu affected his family.

One of the aspects Landesman succeeds at is presenting the idea behind the American dream. Dr. Omalu was a Nigerian immigrant who believed that anything was possible in America. Dr. Omalu claims that, “America was the manifestation of what God wanted us to be.” He loved his work and the idea of learning as much as he could. His life, education, and career all came crashing down on him at the hands of the NFL who was determined shut him up and retract his findings. He comes to learn that that football is a way of life as we have one day of the week completely devoted to it. He didn’t know the ins and outs of the sport until he started to investigate the science behind the head injuries. It’s fascinating to see him decide to go up against the NFL. It’s as if he is either too naïve or actually strong enough to fight to have his voice heard.

As Dr. Bennett Omalu, Will Smith gives one of the best performances of his career. We’re used to seeing him as the action star of big summer blockbusters. He’s attempted dramatic roles in other true stories such as Ali and The Pursuit of Happyiness both of which earned him Oscar nominations. He won me over from the very first scene. He gives one of his most restrained performances to date and nails the Nigerian accent. He is by no means the energetic hotshot we’ve come to expect from him. It reminded me of the actor he can be when given a role that can challenge him. I wonder why he doesn’t take more of these sorts of films on. If he had more balance in his career with role diversity, I don’t think audiences would be so surprised by his abilities when he decides to take on these roles. Smith is joined by Alec Baldwin as a former doctor who is intrigued by Dr. Omalu’s findings. It’s a standard Baldwin type of performance, but with a Southern accent that seems to come and go throughout the movie. Luke Wilson briefly pops up at Roger Goodell. It may seem like odd casting, but Wilson’s dopey ways seem fairly appropriate for the commissioner.

Concussion was a real eye opener for this non-football watcher. I appreciated the examination of the science behind how the brain is affected by the continual brutality that comes with being tackled and thrown around. It seems all the more tragic thinking that it starts out at a very young age with child football players. The film prompted a good discussion afterwards about cheering for a sport when you know the organization behind it is beyond corrupt. It is also very apparent that the NFL has already squashed the movie as the marketing and buzz has been minimal. I want to hear more people talking about their reactions to the movie, Dr. Omalu’s findings, and if it has any affect on their love of the game.

Is It Worth Your Trip to the Movies? Even if you have a limited knowledge of the game of football, Concussion will hopefully shed light on a very dangerous side effect of the beloved game.