Movie Review: DUMB AND DUMBER TO 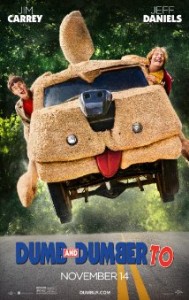 It’s an accurate assessment to say that Dumb and Dumber To lives up to its title, but that’s not really a good thing. Jim Carrey and Jeff Daniels have reunited to take on their roles of idiots Lloyd Christmas and Harry Dunne, respectively. It’s been twenty years since we last took a road trip with them to Aspen. Lloyd has spent that time in a psychiatric facility after being rejected by Mary Swanson. Harry has gone to visit him every Wednesday since then. On his latest visit, he tells a comatose Lloyd that he can no longer stop by as he is in need of a kidney transplant. Leave it to Lloyd to pull a huge prank by waking up and proclaiming he has been faking it for the last twenty years.

When Harry and Lloyd go visit Harry’s parents, Harry finds out he is adopted, which should be blatantly obvious as his parents are Asian. He also learns that he has a long lost daughter (Melvin) with his old friend Fraida Felcher (Turner). Fraida informs the guys that she gave up their daughter for adoption when she was born, but she knows the address of where she lives. Harry and Lloyd set out on another road trip to find her, and it’s not long before they find themselves in a whirlwind of trouble and crazy antics.

I must admit that I was never a huge fan of the first Dumb and Dumber. I had friends that just obsessed over it, but it was never my Jim Carrey comedy of choice. I think some of it was funny, but I would never claim it to be the funniest movie to grace the silver screen. Maybe I went into this one without the biggest appreciation for it, but I am an easy target for these types of reunion type movies. It’s fun to see Jim Carrey and Jeff Daniels team up again and see what these characters have been up to.

The directing team of Peter and Bobby Farrelly are back again, and they co-wrote the film with four other screenwriters. That’s right, the film boasts six writers, yet somehow it is nowhere near as funny as it should be. There was something innocent and forgivable about the lowbrow humor of the first film. If you have seen any of the Farrelly brothers’ movies, you know the comedy is gross, raunchy, bathroom style humor. I think they could have played more into how dumb the characters are over just resorting to the childish humor that gets old pretty quickly. Even though these characters are twenty years older, they have not matured, aged, or grown up in any way. I guess that makes sense, but it doesn’t really work this time around.

I give Carrey and Daniels credit for going to the extremes in this film. They have both said that they made the film as a treat for the fans who have continually asked them to make a sequel. The fans will get a kick out of some of the references and gags to the first film. Sometimes these reunion type movies come about because the actors are passed their prime and need a paycheck. I don’t really think this is that scenario as both are still working and Daniels is a recent Emmy winner for his outstanding work on The Newsroom. His character Will McAvoy is the polar opposite of Harry Dunne. Both of them are definitely committed to these characters and nothing seemed out of boundaries for them. Yes, the fans may have thought they wanted a sequel, but I really think the time has passed. My generation has grown up now, and I wonder if they would still find these characters funny after twenty years. Would a new generation come to know and love them with this film?

The film never bored me nor did I ever feel like I was losing brain cells like I would at some Adam Sandler films. I just think it was made fast, cheap, and easy. Yes, I suppose you know what you are getting yourself into when you walk into a movie called Dumb and Dumber To, but that doesn’t mean that the jokes have to fall flat. When you result to fart and poop jokes over and over, it just feels lazy instead of trying a different gag or punchline.

Is it Worth a Trip to the Movies? There are a few laughs to be had throughout, but not enough to get you rolling in the aisles.