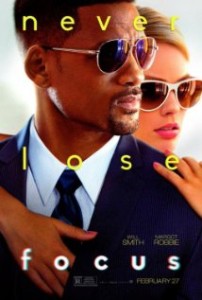 I feel like most people will go see Focus due to it being a Will Smith movie. I, for one, was far more excited knowing that Margot Robbie was playing his counterpart. When Jess (Robbie) first lays eyes on Nicky (Smith) at a restaurant she uses him as her escape to get away from a smarmy guy trying to get cozy with her at the bar. She sits down at Nicky’s table and they start hitting it off. They toss back a few drinks and eventually head up to a hotel room. Their bedroom actions are cut short when a hit man enters their room, and you realize you’ve been played as an audience member as this has all been a big scheme. Jess is an aspiring con artist hoping to make it in the big leagues. Nicky is a professional conman who is teaching her the finer tricks of the trade. She quickly impresses him after a spree of pickpockets on the streets of New Orleans. He offers her a spot on his team where she learns of the larger and wealthier game he is a part of. His game focuses on volume over small high-stakes cons. She starts getting very cozy with him, which causes her abrupt dismissal from the crew. This is after she was a part of a crazy con at a fictional Super Bowl game where she won him millions upon millions of dollars.

Three years pass by and Nicky takes on a new case down in Buenos Aires involving a race car circuit. It seems like just another job until Nicky spots Jess at a party where she is arm in arm with Garriga (Santoro), the owner of one of the race cars. She is by no means sole arm candy as she has that femme fatale quality to her. Jess is not so quick to forget about their New Orleans past. Is it mere coincidence that Jess happens to be there or is she a plant to throw off his game? Both are sharp and cunning characters and you wonder who will outwit and outlast the other one or if they planning the game together.

Will Smith finally has a decent film on his hands after years of duds. I couldn’t bring myself to see After Earth. Men in Black III was moderately passable, but 2008’s Seven Pounds was a huge waste of time. He’s back at playing a character that fits in his wheelhouse. He pairs well with Margot Robbie who made her big break with The Wolf of Wall Street and continues her hot streak. She can play the fun, flirty angle but also has this rebellious and wild side to her. She’s definitely one you should keep your eye on. I’m really looking forward to her next film Z for Zachariah, and she’ll reteam with Smith in DC Comic’s The Suicide Squad. There’s a fun back and forth chemistry between them as you debate who will come out on top.

The team of Glenn Ficarra and John Requa have had their hands in a wide variety of films like Crazy, Stupid, Love., I Love You Phillip Morris, and Cats & Dogs. They pull double duty here as they wrote and directed it. I’m at odds with how this film is structured. The whole first half of the movie takes place in New Orleans and is pure character build-up that sets up the relationship between Jess and Nicky. The pace and energy flows pretty swiftly as they start flirting and move from one con to the next. The bigger issue at hand is that I kept wondering when the actual story would kick in. The main plot is finally established in the second half when it switches to the Buenos Aires setting. Why did we have to jump three years and one continent before settling in to what this movie was actually going to be about? Plus, we’re then introduced to a new crop of characters. It’s about time the great Gerald McRaney (“House of Cards”) showed up. He’s always good at the gruff and untrustworthy characters.

Due to the nature of the con artist premise, there are some twists and turns throughout the film with one big reveal at the ending. With these types of stories, an ending can make or break a film. The final twist is not how I would have ended the film, but it doesn’t ruin it at the same time. It’s not as smart or sharp as other con films we’ve seen in the past, like Ocean’s Eleven, but there is still fun to be had as you play along and wonder who is conning who, how the cons are played out, and who will ultimately win in the end. It’s not great, but it’s far better than plenty of the other winter releases filling up the movie theater.

Is It Worth Your Trip to the Movies? Focus is a fun, date night type of movie, and you don’t need to think to hard along the way.