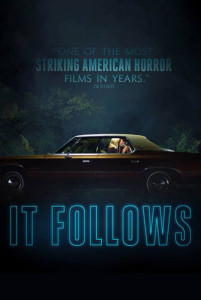 If you are familiar with those old rules for successfully surviving a horror movie, you may remember the one that says you can never have sex. It Follows uses that concept of teens having sex as the basis for the movie. Don’t start rolling eyes thinking it’s going to be about bunch of naked bimbos getting wacked after having sex with their jock boyfriends. It is definitely not that kind of movie. These teens are more like outsiders than those attending a high school football game. It’s a quiet fall day in the suburbs when Annie (Spry) comes running out of her house. You get the impression that someone or something may be chasing her, but we don’t see what it is at that time. She hides out at the beach and in the evening makes that dreaded phone call to her parents stating that she loves them. You just know then and there she knows her death is upon her. The sun comes up the next morning to reveal her dead body in the sand.

Annie is not the only victim of this force. Jay (Monroe) and her boyfriend Hugh (Weary) are excited to have a date night at an old art house theater that is showing Charade. Before the movie starts, Hugh sees a vision of a girl in a yellow dress at the back of the theater. He is even more freaked out when Jay doesn’t see the same girl. He insists they leave the theater to get away from this girl that seems to be haunting him. A few days later the two of them have sex in the back of his car in a deserted area. A bizarre turn of events happens when he goes out to his trunk and comes back and knocks her out with chloroform soaked rag. She wakes up tied to a chair with him informing her that he has now passed on this curse/force/it onto her that he got after previously having a one night stand. Just like he predicted, Jay starts to have visions of people following her, walking up to her, and attacking her. Her sister Kelly (Siepe) and friends Greg (Zovatto) and Yara (Luccardi) stick by her side to help her deal with the looming presence that may be after her.

At first the premise doesn’t seem all that original. Teens having sex in a horror movie. Been there done that. What makes this one stand aside from the rest of the plethora of scary movies that come out each year is in its execution. For a movie with teen sex, there are very few sex scenes and the nudity is graphic but used sparingly. It Follows plays with this idea of what happens with these teens when one has a sexual encounter with a boy she likes. Is it a guilty conscious that comes with having sex at a young age for Jay? Whatever “it” is, it comes in a variety of forms that haunt her. I like the fact that the visions are of real people that seem to be coming at her. They aren’t zombies or creatures with half of their faces ripped off. The movie is haunting because the scares come from that idea and paranoia we all have had at some point that someone is following us. We hear a rustle in bushes, see a shadow on the sidewalk, or feel that sense that someone is watching us. We are then covered in goosebumps.

From the first frame, I couldn’t help but think about the classic John Carpenter horror film Halloween. This is not to claim that writer/director David Robert Mitchell (The Myth of the American Sleepover) is copying Carpenter in any capacity like so many recent horror movies tend to do. Mitchell seems inspired by Carpenter. There are little homages here and there in reference to Halloween. I won’t list them all here as it’s better to find them on your own. There’s also that vintage feel with the old cars, radios, and television sets. It brought me back to those low budget scary movies I watched as a teen that I borrowed from the video store I worked at. Those were the days.

This is an impressive second film for David Robert Mitchell. He has lined up a cast of up and coming actors led by Maika Monroe as Jay. This is also the first film for composer Disasterpeace. Let me tell you, the ever-present synth score makes the film even spookier. There is a slow and meditative sense at times.  Each scene seems deliberate and feels like it’s about the characters journey first and foremost.  Mitchell has no interest in rushing the scares just to try to get the audience to jump.

I saw an Instagram post that asked for the qualities that make a good scary movie. I answered with: a story that seems realistic, practical effects, and a creepy score. This film has all of those qualities that I look for in a film that is supposed to be scary. The genre has been laden recently with films that want to gross you out with blood and guts spewing out of a body, devil possession, or found footage (ahem The Lazarus Effect). While those can be effective at producing a scare or two, they can grow old quickly. It Follows takes inspiration from the films that scare David Robert Mitchell. We must have similar tastes as he’s created something right up my alley. If you’re wondering why my review seems sparse, there’s a reason why I’m keeping it sparse. I think with this genre, more than any other, the less you know the better. Hold off on watching too many trailers or reading too many reviews until you see this movie. Each year I feel like we get one good scary movie. 2013 with The Conjuring, 2014 with The Babadook, and 2015 has It Follows.

Is It Worth Your Trip to the Movies? It Follows is a much needed breath of fresh air for the horror genre.