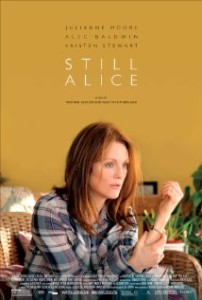 It’s a pretty easy claim to make that Julianne Moore is one of the best actresses working today. I got into a pretty lengthy Facebook thread with some friends the other night about the superior performances she has given over the years with the likes of The Hours, Far From Heaven, Magnolia, Game Change, and Boogie Nights coming to mind. In Still Alice, she may just give her best performance to date, and that’s saying something given her body of work. She plays Alice Howland, a linguistics professor at Columbia University. She is obviously quite comfortable at public speaking and addressing a room of eager students. While delivering a guest presentation at another college, she loses her train of thought and quickly covers it up by blaming it on having too many glasses of champagne. She knows this isn’t true, but it’s an easy cover that will get a laugh out of the students. One day while out jogging around her campus, she gets lost and doesn’t quite recognize the buildings around her. She knows campus like the back of her hand, so this is another alarming moment for her. She privately goes to the doctor to get checked out for a brain tumor.

After numerous tests, she is informed she has early on-set Alzheimer’s disease, which is rare for someone of her age. Alice is a headstrong type of person who knows the disease is affecting her, but she doesn’t want her life to stop in the process. She and her husband John (Baldwin) decide to inform their three children (Bosworth, Parrish, and Stewart) of the news once they receive notification that it has the potential to be passed down from one generation to the next. As the story progresses, we see that each member of the family has different ways of dealing with the news. Eldest daughter Anna (Bosworth) is starting her own family and has the classic first born mentality toward her other siblings and believes she knows what’s best for her mother. Lydia (Stewart) is the youngest sibling who has moved away, skipped college, and tries to make it as an actress. Even though Alice has a hard time accepting Lydia’s choices in life, her illness ends up being the catalyst that redefines their relationship.

The title may sound familiar to you as it is based off the book by Lisa Genova. The directing team of Wash Westmoreland and Richard Glatzer also wrote the screenplay based off her book. They have experience in dealing with a debilitating illness as Glatzer was diagnosed with ALS in 2011 and is no longer able to speak. Their experience helps give the film an open and honest portrayal of Alzheimer’s through the human perspective instead of giving it this overly medical and scientific approach. There are times when they give a hazy out of focus look to Alice’s background to mirror the feeling she is going through when she starts losing her way. I found the film quite informative about the effects of Alzheimer’s and how the individual feels. The film has a Minnesota connection as Sartell resident Sandy Oltz was a consultant on the film. Many of the troubles Alice goes through are inspired by Oltz’s own experiences and tricks she uses to try to keep her memory as sharp as possible.

The story primarily focuses on Moore’s character and the relationship she has with Kristen Stewart who plays the youngest daughter. I don’t know if it’s the fault of Lisa Genova’s book or if it’s the script, but the rest of the family isn’t quite written with enough specificity to care about any of them or give the other actors anything complex to play with outside of being a grieving family member. Alec Baldwin is always good at playing the unlikable jerk character and that is how his character is portrayed. He’s a successful college professor himself who doesn’t know how to deal with his wife’s illness. His way of dealing with it is by ignoring it and focusing on himself. As Anna, Kate Bosworth feels a bit stagnant and one-noted throughout the film. Surprisingly enough, Kristen Stewart comes off quite impressive. She has received a lot of negative press and bad reviews for her wooden performance in all of the Twilight films. Now that she’s given someone decent to play, we see a new side of her that’s refreshing. There’s more life in her eyes and she’s not as sullen as Bella Swan. At one point, we do see her character performing in a Chekov play. If you can get over the idea of Kristen Stewart performing Chekov and focus on the rest of the movie, she pairs well with Moore and proves she’s more than a one-noted YA star.

I am always drawn into the psychological and emotional depth Julianne Moore brings forth to any of her diverse characters. She’s the kind of actor that can make even a mediocre movie rise above itself. Moore is the reason why the film works so well. She gives a very dignified and heartbreaking performance. She has a way of grabbing hold of the audience without ever feeling too out of control with this character. It is a fine line to play due to the unpredictable nature that comes with Alzheimer’s. I don’t typically cry at movies, but I really lost it during one scene where Alice has to give a speech at an Alzheimer’s conference. Moore is completely vulnerable and open and really makes you think about what would happen if you had to deal with your mother or significant other if they had Alzheimer’s. She is nominated for the Best Actress Oscar and deserves every award out there for this performance.

Westmoreland and Glatzer only have a few movies under their belts including The Last of Robin Hood with Kevin Kline and Quinceañera from 2006. I would have liked to see this film fleshed out a bit more. It starts out with her realizing something is wrong in the classroom and hits the ground running from there. There is potential with the family dynamic that should be explored more. The score by Ilan Eshkeri gets a bit sentimental and dramatic when it doesn’t need to be. You can trust that Julianne Moore is giving us everything we need to know about the scene and Alice’s condition that we don’t need additional underscoring to force emotion. If it weren’t for her, this film would not nearly have the same impact.

Is It Worth Your Trip to the Movies? While it’s a very sad film, you won’t want to miss Julianne Moore’s beautiful and soon to be Oscar winning performance. Don’t forget to bring Kleenex or two.