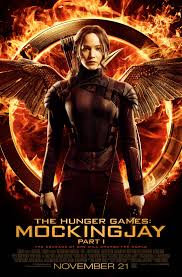 Leave it to the studios to split up the finale of another young adult book into two films. We’ve seen this before with Harry Potter and the Deathly Hallows and The Twilight Saga: Breaking Dawn. The real question is whether there is enough material in Suzanne Collins’ book Mockingjay to warrant the split. Having read the series, I can safely say there isn’t enough to fill four hours worth of movies. After Katniss Everdeen (Lawrence) destroyed the force field during the Quarter Quell, she became the hero once again. The citizens of Panem view her as an inspiration due to her strength and power against evil President Snow (Sutherland) and the Capitol. There have been riots in seven of the thirteen districts as they think they can overthrow the Capitol. Back at District 13, Katniss continues to have nightmares and worries about her friend, Peeta Mellark (Hutcherson), who has been captured and tortured by the Capitol.

President Alma Coin (Moore) and game maker Plutarch Heavensbee (Hoffman) approach Katniss to be the symbol of the “mockingjay” by becoming the leader of the new rebellion. She may be the only one who can put a stop to Snow and his regime. After seeing the destruction of her home district, she feels no choice but to take on this challenge. They create propaganda videos and air them throughout Panem to get the people’s support and send a clear message to Snow. He counters by stating he wants to restore order as well by banning the mockingjay image and by brain washing Peeta against Katniss and the rest of the rebellion.

Director Francis Lawrence and screenwriters Peter Craig and Danny Strong have done a decent job at keeping the pace up knowing that they are trying to fill two movies worth of material. There is relief in knowing that author Suzanne Collins provided the adaptation and serves as one of the executive producers of the film. They have created a strong and fervent energy for the first half of this film as you witness the destruction and horror that has taken place in Panem as well as its effects on Katniss, Peeta, and the other tributes. The film is far darker, somber, and very grim compared to the lively and colorful palette of the first two. I have been a big fan of the series, so I didn’t mind some of the “filler” as many scenes aren’t necessarily needed. Those that aren’t as invested in the movies may feel it drags on for too long.

I have to admit that I was never a fan of the third book. I thought it pales in comparison to the action of the first two. One of my biggest issues was that Katniss became ultra-whiny which was a huge deterrent for a character that always seemed so strong. Jennifer Lawrence delicately balances the broken Katniss while still knowing that there is a fighter inside of her. She teeters on the edge, but I never felt like she was overly obnoxious like I did when I read the book. Elizabeth Banks provides some much needed humor as Effie Trinket. In this film, Effie acts like a faded Hollywood actress still trying to hang onto her beauty and glamor when it’s been stripped away from her. Joining the cast this time around is one of my favorite actresses, Julianne Moore. She gives Alma Coin a stoic and restrained appearance which is quite the opposite of President Snow. I think there is still some mystery left to her character. It’s a treat to see her partner with the late great Philip Seymour Hoffman. They have worked together multiple times before in Magnolia, Boogie Nights, and The Big Lebowski. He passed away just weeks before filming wrapped, and it ends with a dedication to him.

I don’t think The Hunger Games: Mockingjay Part 1 is as good as the second film. The first two felt like they were their own stories while fitting into a larger entity. The first part of the finale doesn’t quite feel that way due to the nature of the split. It’s also pretty imperative to see those films before seeing this one. Even though this film doesn’t have the strongest story or a complete arc of its own, the rebellion and war propaganda give the audience new ideas to latch onto and makes it bit more of realistic. I think there is also something to be said about Collins’ creation and the way director Francis Lawrence has brought it to life when you have such a powerful set of actors that have devoted the past few years to these movies. Sure, big paychecks probably come along with it, but you have people like Moore, Sutherland, Hoffman, Tucci, and Harrelson all sign on and give lively and dynamic performances. You don’t often see this much star power or the wide range of interesting characters in the young adult genre. These movies wouldn’t be as successful if it wasn’t for Jennifer Lawrence who continues to keep Katniss grounded, believable, and a heroine you root for at all times.

Is It Worth Your Trip to the Movies? The series doesn’t feel warn out and tired, but this is just a teaser for what hopefully will be a bigger and more fulfilling Part 2.