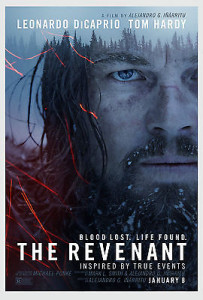 Keep breathing. When all hope is lost, just keep breathing. That’s the lesson Hugh Glass (DiCaprio) is trying to ingrain in his son, Hawk (Goodluck). Along with John Fitzgerald (Hardy) and Jim Bridger (Poulter), they are part of a fur-hunting group led by Andrew Henry (Gleeson). They find themselves under attack by a group of Native Americans. Members of their group perish, but thankfully they are able to escape. They must leave their boat and many of the pelts aside to lighten their load and keep a low profile. Tension continues to build between Fitzgerald and Glass as Hawk, who is part Native American, continues to be a part of the group. At one point when Glass is separated from the group, he is brutally attacked and mauled by a bear. He is whipped around, has his throat slashed but, in the end, survives the attack.

His men find him before it’s too late, but there’s a difference of opinion on if they should leave him there to die or carry him along the way. They attempt to carry him up the snowy mountains, but it becomes too much work. Hawk, Fitzgerald, and Bridger decide to stay back with him. This is all a ploy by Fitzgerald who kills Hawk and leaves Glass for dead. Glass continues to cheat death and sets out to find Fitzgerald and avenge his son’s death.

Director Alejandro González Iñárritu won the Oscar last year for Birdman and continues to make another unconventional film that will no doubt test the limits of everyone involved. He and Mark L. Smith (Vacancy) based part of their script on the book of the same name by Michael Punke. Iñárritu brings back his Birdman cinematographer, Emmanuel Lubezki, who may just go on win his third back-to-back Oscar after winning for Gravity and Birdman. With a majority of the movie taking place outdoors, they shot the film using all natural lighting. This choice perfectly captures the grueling weather at hand and makes nature an important character in the film. His use of wide angles and extreme close ups have a way of showing just how small we are compared to the magnitude of what nature has to offer.

The Revenant may just be the most brutal movie of the year. That’s saying something when Quentin Tarantino’s latest, The Hateful Eight, was released just weeks prior. The difference is in the approach. Iñárritu makes it as realistic as possible. He wants you to feel it. The opening fight scene is violent and ruthless. The audience is put right in the middle as arrows are shot and blood is flung fast and loose. It sets the tone that it won’t be an easy film to watch. We are then given the bear attack scene, which is unsettling to say the least. It doesn’t even help knowing that it’s all done with CGI. It’s just the beginning of the gore, violence, and carnage at hand. It is by no means for the faint of heart.

Leonardo DiCaprio spends a majority of the film without saying a word due to his attacks. It’s clearly one of the most physically demanding performances he has given. In true DiCaprio fashion, he throws himself completely into his role as he battles the elements. It’s quite impressive with what he goes through given the course of the story. This is the film that will probably land him his long-awaited and much-deserved Oscar. While he will probably get the most praise for the film, his co-star Tom Hardy (Mad Max Fury Road) gives what may be his best performance to date. He makes for one manipulative kind of villain. Hardy goes to dark places, and you can see the crazy in his eyes. You grow to completely hate his character and wish he had been the one attacked by the bear.

There’s no question as to whether The Revenant must have been a tough movie to make. Iñárritu tests his actors and his audience for this two and a half hour revenge story. It’s man versus nature and man versus man as you journey with DiCaprio’s character and his desperate attempt at survival. There is a good hour of the film that is dialogue free, but it never loses its momentum as there are many obstacles along the way that test his survival skills. You’ll know within the first twenty minutes if you will be in it for the long haul. It will inevitably be too much for some people to handle due to the violence and graphic “in your face” nature of it. Iñárritu does not hold back in any regard. You’ll come out puzzled, perplexed, and scratching your head. I came out speechless and unsure of what I just watched and what just happened, but it stuck with me for days afterwards.

Is It Worth Your Trip to the Movies? If you can go along with it, you will be engrossed and taken for an insane adventure.