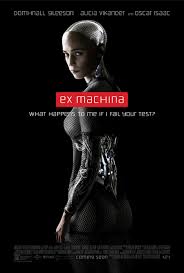 I’m just going to throw it out there and say that Oscar Isaac is one of my favorite actors working today. He seems to transform himself with every role without it feeling too showy. In Ex Machina, he plays Nathan, the CEO of a search engine who has secluded himself at his own research facility deep within the mountains of a woody area. One of his employees, Caleb (Gleeson), finds out he has won a coveted position to work for Nathan at the compound. The off the grid feeling is a bit alarming for Caleb when he arrives. He is flown in but has to be dropped off a ways away from the actual facility. Plus, he has no cell phone reception.

Nathan wants Caleb to be the human subject as part of a Turing Test on his latest robot named Ava (Vikander) who has artificial intelligence. The test will determine if she has a consciousness, if she has self-awareness, and has raw human emotions. Ava has a three dimensional body modeled after a human containing a human face, human hands, and a mainly see-through exoskeleton. Caleb’s weeklong getaway starts off impressive. His first few sessions with Ava are educational to say the least. As the week progresses he learns more about what Nathan is working on beneath the surface. There are frequent power outages, and during one of them, Ava opens up to Caleb claiming that Nathan cannot be trusted. Caleb now questions if Ava is telling the truth or if Nathan as part of the test is still controlling her.

Ex Machina is the directorial debut for Alex Garland who also wrote the script. His previous writing efforts include the reboot of Dredd and a couple of Danny Boyle’s films including Sunshine and 28 Days Later. He wanted to present a world that brings science fiction to the edge of the modern world. He wanted to make the technology as realistic as possible. Artificial intelligence seems to be more popular than ever, and he believes that we wouldn’t be surprised if Apple or Google had announced an AI program of their own. That was the vision he had with this film.

There have been a few movies recently that cover the concept of artificial intelligence, but the concepts often seem too lofty leading to an unrealistic or laughable ending. Ex Machina is that rare one of this breed that works from beginning to end. Garland keeps the film at a steady pace by taking his time to let the concepts develop. He keeps your interest piqued as you wonder where he’s going to go next with each session. The audience is only as far ahead as Caleb. This seems like such an easy idea when so many movies of this genre either race ahead in the storyline or make the ending unbelievably predictable. We learn more about Ava as he does and our suspicion of Nathan continues to grow as Caleb’s does. Despite the sci-fi nature, Garland doesn’t get bogged down by techie language trying to make the script sound smart. He focuses more on the concepts of what would happen if artificial intelligence could be created. He debates how we would react with it, how do we act when we are being observed versus when we don’t think we are being observed. He puts just as much emphasis on the interactions between Nathan and Caleb and Caleb and Ava as he does with the technology and science behind it all.

Garland’s characterizations are part of the film’s appeal, and he found three underappreciated actors to tackle them. As Nathan, Oscar Isaac (A Most Violent Year, Inside Llewyn Davis) is the ideal choice as he masterfully keeps his characters at a distant. Whenever you watch him, he never plays his whole hand at once. He wisely keeps Nathan a mystery where you don’t always know what’s going to happen next. He’s also a bit of a chameleon donning a vastly different look and physicality with every character he plays. He will become a household name by the end of the year as he plays Poe Dameron in Star Wars: The Force Awakens. Domhnall Gleeson (About Time) has a smart and innocent quality about him and brings forth that vulnerability needed to be easily swayed by Nathan or Ava. Alicia Vikander (The Man from U.N.C.L.E.) has a soft and angelic tone that easily makes you believe Ava is discovering life and reality for the first time. Her physical choices are precise and on point as it’s a fine line between making this type of character feel like a one-noted robot while not feeling overly human at the same time.

I had grown tired of artificial intelligence movies as they didn’t always tackle the concepts properly or they got bogged down in CGI making them more fantasy than sci-fi. Ex Machina may have swayed me back into this premise. It shouldn’t really be considered a breakout film for Garland, but I’m really looking forward to his next projects as writer and director. Hopefully they continue to push our thoughts into more elaborate yet potential realities.

Is It Worth Your Trip to the Movies? One most intelligence and thought-provoking films I’ve seen all year.