“Oh, look. Another glorious morning. It makes me SICK!”

In my household, one of our must see Halloween movies (outside of Halloween) is Hocus Pocus. Quite frankly we watch it all year round. We even quote it all year round. Like many people of my generation, the love of this Bette Midler Halloween classic goes back to when I was a wee lad. Confession time. I was a little ten year old boy obsessed with Ms. Midler. I do not know if it was this movie or Beaches that laid the foundation for my life-long diva love. I do remember seeing the Divine Miss M Tour as a child. She did the tour right after Hocus Pocus came out and I remember getting excited that she mentioned the movie in her opening bit. I am getting somewhat off track. This is not going to be another blog devoted to my past. Let’s get back to the movie at hand.

Poor Max Dennison (Katz). His family moves from Los Angeles to Salem, and now he is stuck with no friends in a town where Halloween is treated like the best day of the year. Salem comes alive on Halloween night due to the legend of the Sanderson sisters. As the legend has it, Winifred (Midler), Mary (Najimy), and Sarah (Parker) were three witches that feasted on the souls of the children of the town. The townspeople rallied together and hung the sisters thinking they were killing them and ending their horror once and for all.

Max is too pessimistic to believe in any of this hocus pocus. He just cannot seem to give into the town’s holiday rituals and festivities. To make matters worse, his parents force him to take his annoying younger sister, Dani (Birch), trick-or-treating that evening. One of their stops includes a nice mansion that is throwing a party. They sneak in to steal some candy where they meet Allison (Shaw). She just happens to be Max’s school crush. Upon noticing Dani’s witch costume, Allison asks her if she knows about the Sanderson legacy. Her family used to run the now-closed museum in the original cottage of the Sanderson sisters. Dani gets all too excited by this and the three of them head out to the museum. Max is basically going along to spend time with Allison as he is way too cool to actually believe in the spooky Sanderson sisters.

Dani, Max, and Allison scope out the various artifacts and supposed belongings as a pair of eyes watch from outside. Those eyes belong to a talking black cat. The cat is Thackery Binx whose sister was killed by the witches. Winifred turned him into a cat when he tried to save her. He stands guard making sure no one brings the sisters back to life. The legend has it that if a virgin lights the black flame candle, Winifred, Mary, and Sarah will come back to life. Leave it to Max to be the doofus of the group. He lights the candle and, true enough, the sisters are back with a vengeance! With the help of Thackery and Billy the Zombie, they use various methods like “The Burning Rain of Death” and Daylight Savings Time to stop the witches. The sisters have until sunrise to create a potion and suck the souls of the children to live forever. 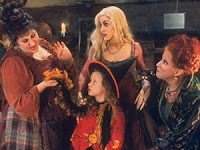 Being a huge Bette Midler fan, I have seen her interviewed many times on talk show appearances and once in person. Like I said previously, I have seen her in concert two times as well. She has repeatedly said that Hocus Pocus is her favorite film she has ever worked on and has been the most fun she’s had while making a movie. I think it is easy to tell that the ladies are having a great time. They have wicked chemistry together. Outside of Carrie Bradshaw, I think this is Sarah Jessica Parker’s next best performance. She is funny, flighty, and flirty. It is her job to lure all of the children into their cottage. The costume and make-up design is perfect for this kind of movie. Not every witch character needs to be dark and morose in appearance. Each of the three witches has a different color palette and look. The script is quite clever and funny at times. Midler and Najimy have some fun zingers that are instantly quotable. For a movie brought to you by the Disney company, it is quite daring with some of the topics described like the witch mythology or even mentioning that only a virgin can bring the witches back. I do not think that this movie could have been written the the same way if it was made today.

Even though it may seem like the target audience is for younger children between the ages of 5-13, it appeals to many generations. I do not think parents need to worry if their child will play this movie over and over again. I guarantee you won’t get sick of it. I cannot finish writing this without mentioning my favorite scene. Dani, Allison, and Max drop in on a party to find their parents and tell them that the sisters have come back. Low and behold, the sisters drop in as well. Winifred takes over the mic and performs the show-stopping “I Put a Spell On You”. Mary and Sarah join her as back-up singers. Every time I see Bette in concert, I desperately hope she sings a version of this. It hasn’t happened yet, but maybe someday. Now available on Blu-Ray and DVD.

Is It Worth Your Trip to the Movies? It’s a Halloween movie the whole family will enjoy. Guaranteed.