Movie Trailer: MUCH ADO ABOUT NOTHING 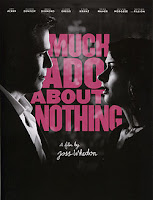 Joss Whedon fans are rejoicing at the release of his latest work. The Whedonites are a strong group of devout followers. I have being getting on the Whedon bandwagon lately with his work on The Cabin in the Woods and Marvel’s The Avengers, two of my favorite films of 2012. This time Joss and his fellow company of actors bring us a new adaptation of William Shakespeare’s play “Much Ado About Nothing”. Whedon and his cast and crew shot the movie very discreetly back in 2011 at his house over a brief time. The film had its first premiere at the Toronto Film Festival last year and will make it’s U.S. premiere at the South by Southwest (SXSW) Festival in March. Being a big Shakespeare fan, I get a little leery with film adaptations. In this case, I trust Joss and love the black and white look of the film. What are your first impressions?