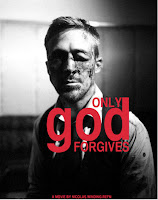 One of my favorite films from 2011 was Drive. If you have never seen it, I cannot recommend it enough. It is now available on Netflix Streaming and you can find my 4.5-star review here. It’s director, Nicolas Winding Refn, is re-teaming with star Ryan Gosling for Only God Forgives.   Julian (Gosling) owns a Thai boxing club as a cover for his family’s drug smuggling operation. His mother (Scott Thomas) arrives and convinces him to find and kill the person who is responsible for the death of his brother. There is not a lot of plot explained in the trailer, but it sure gives off the style and tone of the film.  The beautiful and insanely talented Kristen Scott Thomas has joined them for what looks to be another exquisite, gritty, dark, violent, and bloody trip. From the trailer: “When I was pregnant with you. It was strange. You were different. They wanted me to terminate, but I wouldn’t. I don’t understand you, and I never will.”RELEASE DATE: July 19, 2013