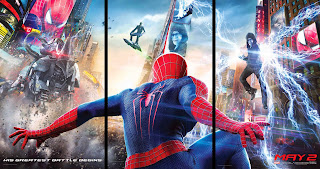 The 2012 reboot The Amazing Spider-Man seemed a bit too soon to revitalize a franchise with a brand new cast. While I did not think the film was that strong overall, director Mark Webb and his cast did a decent job at setting the groundwork for some exciting new Spidey stories.

The new teaser trailer has been released and naturally is long enough and filled with enough footage that it feels like your standard trailer. The new film brings in Chris Cooper and Dane DeHaan as father/son duo Norman and Harry Osborn. Our villains this time around include Jamie Foxx as Electro and Paul Giamatti as Rhino. There also seems to be a glimpse of Green Goblin as well! From the look of this “teaser”, it will sure be one massive, high-octane, action packed adventure that will be huge at the box office

What are you first impressions? Feel free to sound off in the comments below!