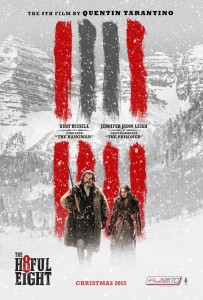 It’s the little things in life that can turn a sour week upside down. Leave it to Quentin Tarantino and The Weinstein Company to put you in a heavenly trance for two minutes as they unleash the trailer for his eighth film, The Hateful Eight. Within seconds, the image of Samuel L. Jackson pops up as he’s asking for a ride when a stagecoach pulls up with Kurt Russell and Jennifer Jason Leigh inside. Jackson is quite perfect in any Tarantino vehicle and I was grinning ear to ear throughout the entire trailer. We all know Tarantino likes to work with the same actors over and over, and Jackson isn’t the only one coming back for this one. Bruce Dern, Michael Madsen, Tim Roth, Walter Goggins, and Zoe Bell have all appeared in previous Tarantino movies.

Just by the look of the trailer and knowing Tarantino’s style, you can already bet on some crazy characters, blood splatter, shoot-outs, and an epic finale. What else do you expect when bounty hunters, soldiers, renegades, and other strangers are stuck in a small cabin in the middle of a blizzard? The Hateful Eight will no doubt be another hit for Tarantino. Film buffs will also be excited to know it’s being presented in 70mm after being “filmed on glorious Ultra Panavision”.