Movie Trailer: THE HOBBIT: THE DESOLATION OF SMAUG 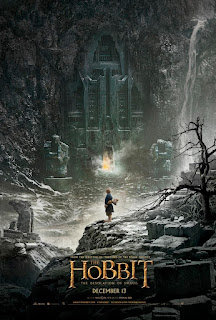 As we saw at the end of The Hobbit: An Unexpected Journey, the dragon Smaug (Cumberbatch) has awoken in the Lonely Mountain. The second part in Peter Jackson’s The Hobbit trilogy continues on with Biblo (Freeman) and his adventure with Gandalf (McKellen) , Thorin Oakenshield (Armitage), and the rest of the dwarves to take on the Smaug (Cumberbatch) and reclaim The Lonely Moutain.

This film will also see the return of Orlando Bloom as the Elven Prince Legolas. Evangeline Lilly joins the cast as Tauriel, a female elf, who has been created by Peter Jackson and Philipha Boyens as the character does not appear in the original Tolkien story.

Like The Hobbit: An Unexpected Journey, the second part will also be shown in the followings formats: Read D 3D, HFR 3D, and IMAX 3D.