SHE SAID Director: Maria SchraderStarring: Carey Mulligan, Zoe Kazan, Patricia Clarkson, Andrew Braugher, Samantha Morton, Jennifer Ehle, Ashley Judd The takedown of Hollywood mogul Harvey Weinstein was something that rocked the industry and felt like a long time coming. The new film, She Said, takes an investigative eye into how that happened. It’s based on the book of the same name written by New York Times reporters Jodi Kantor (Kazan) and Megan Twohey (Mulligan) who led the charge in reporting this story. The film picks up with Megan Twohey finishing a piece on the allegations made against President Donald Trump only to find that voters END_OF_DOCUMENT_TOKEN_TO_BE_REPLACED

PULP FICTION Paramount Home Entertainment is proud to present Quentin Tarantino’s instant masterpiece Pulp Fiction for the first time in 4K. The new release is two discs with the 4K, Blu-Ray, and a digital copy of the film. Tarantino’s second film rocked audiences back in 1994 and has continued to gain a new following in the years since. There was no other film like it with its singular voice and dialogue, explosive characters, and its interweaving narratives told out of chronological order. Roger Ebert named it his #2 film of the 1990s. The film was nominated for seven Academy Awards including Best Picture and won END_OF_DOCUMENT_TOKEN_TO_BE_REPLACED

SPOILER ALERT Director: Michael ShowalterStarring: Jim Parsons, Ben Aldridge, Sally Field, Bill Irwin, Nikki M. James, Antoni Porowski, David Marshall Grant Michael Ausiello is a noted TV journalist, but his memoir Spoiler Alert: The Hero Dies, is not about his days covering Gilmore Girls or Veronica Mars. Its focus is on something much more personal. Like all good love stories, the story of Michael and Kit is a meet cute. They’re played by Jim Parsons and Ben Aldridge. It happened to be at a bar where they laid eyes on each other, and Michael drops a Knight Rider reference. Michael is the hopeless romantic even END_OF_DOCUMENT_TOKEN_TO_BE_REPLACED 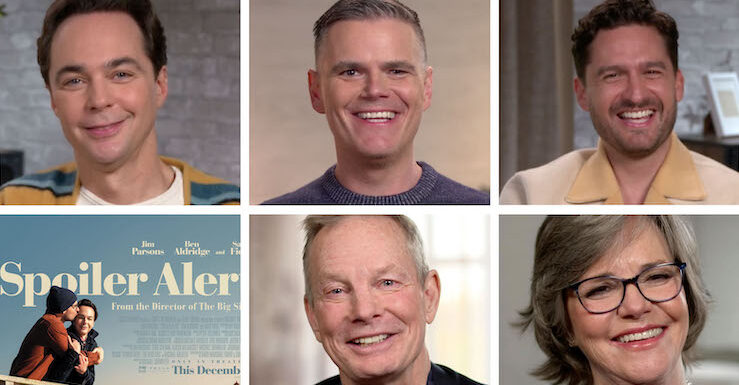 “SPOILER ALERT” Cast Interviews – Jim Parsons, Ben Aldridge, Sally Field, Bill Irwin, Michael Ausiello TV journalist Michael Ausiello wrote a gripping memoir called “Spoiler Alert: The Hero Dies” This incredible book has been adapted for the big screen, and I sat down with Ausiello and the cast: Jim Parsons, Ben Aldridge, Sally Field, and Bill Irwin to talk about making this incredibly personal and touching film. In select theaters December 2 and opens everywhere December 9. Trust me when I say, you will need a Kleenex and don’t miss out on reading Ausiello’s memoir. I would love it if you clicked the Thumbs Up/Like END_OF_DOCUMENT_TOKEN_TO_BE_REPLACED

“WEDNESDAY” Cast Interviews Tim Burton’s newest project has him entering the world of Charles Addams and The Addams Family. Wednesday features Jenna Ortega as Wednesday Addams who is sent off to a boarding school run by Game of Thrones vet Gwendoline Christie. I sat down with Gwendoline Christie, Emma Myers, Percy Hynes-White, Hunter Doohan, and Joy Sunday to talk about their new Netflix series, which is already hitting record viewership numbers breaking Stranger Things Season 4. Audiences are loving it, so look for a Season 2 announcement soon. *Click SUBSCRIBE on my YouTube channel for more reviews and interviews* END_OF_DOCUMENT_TOKEN_TO_BE_REPLACED

THE BANSHEES OF INISHERIN Director: Martin McDonaghStarring: Colin Farrell, Brendan Gleeson, Kerry Condon, Barry Keoghan Renowned playwright, screenwriter, and director Martin McDonagh’s latest The Banshees of Inisherin, tackles the downfall of a long-term friendship, but like any McDonagh story, it’s no easy lesson. The film reunites Colin Farrell and Brendan Gleeson who both starred in McDonagh’s film In Bruges from 2008. Farrell stars as Pádraic who has been friends with Gleeson’s character, Colm, for many years. It’s just another day when Padraic stops by Colm’s house before they had to the pub for a beer. This time Colm doesn’t answer the door but is seen END_OF_DOCUMENT_TOKEN_TO_BE_REPLACED

GLASS ONION: A KNIVES OUT MYSTERY Director: Rian JohnsonStarring: Daniel Craig, Kathryn Hahn, Dave Bautista, Kate Hudson, Leslie Odom Jr, Janelle Monáe, Edward Norton, Jessica Henwick, Madelyn Cline Writer/director Rian Johnson crafted a fine web of intrigue with his murder mystery Knives Out. His lead detective Benoit Blanc is back on the case in Glass Onion: A Knives Out Mystery. The sequel features an all-new cast joining Daniel Craig who is back as Benoit Blanc. Kate Hudson stars as a fashionista and influencer. Kathryn Hahn plays the governor of Connecticut, and Leslie Odom Jr is a scientist who works for a tech billionaire. Then there’s END_OF_DOCUMENT_TOKEN_TO_BE_REPLACED

THE FABELMANS Director: Steven SpielbergStarring: Gabriel LaBelle, Michelle Williams, Paul Dano, Judd Hirsch, Seth Rogen, Mateo Zoryon Francis-DeFord, David Lynch Steven Spielberg has frequently used his family and childhood as themes in his films like E.T. The Extra Terrestrial and Close Encounters of the Third Kind. Now, he faces his past head on in The Fabelmans. This is the fourth film between Spielberg and screenwriter Tony Kushner after Munich, Lincoln, and West Side Story. Together they’ve written The Fabelmans as a meditation and collective healing over some Spielberg’s personal childhood traumas stemming from being Jewish and having divorced parents. In the movie, he’s named Sammy END_OF_DOCUMENT_TOKEN_TO_BE_REPLACED