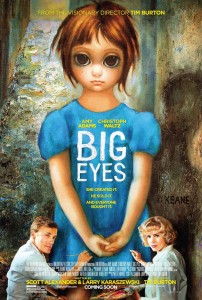 I may get blasted for this comment, but I was relieved to hear that Johnny Depp and Helena Bonham Carter were nowhere to be found in the latest Tim Burton film. I enjoy both of their work, but I was drained and worn out from the Burton/Depp/Bonham Carter collaborations that have been happening in the last decade. Instead, Burton has assembled a cast of actors he has never worked with before. Amy Adams plays Margaret, a 1950s era single mother who has made the bold and unconventional choice to leave her husband. She takes their daughter and her paintings to North Beach, California to start a new life. They don’t have much money, but art has always been her passion. She tries to sell her paintings of young girls with big eyes at a local fair but doesn’t strike up any offers. There she meets Walter (Waltz), another painter known for creating French street scenes. He has that charming salesman attitude that gets her attention. They meet, flirt, and all too quickly get married.

Walter becomes the businessman for their artwork. He’s the one out there getting people’s attention by hanging it near the bathroom of a music club. His slick, fast-talking ways draw people in, but it’s Margaret’s artwork of the expression filled eyes that gets the attention, not his French landscapes. He starts taking credit for her work when the money starts rolling in. She becomes livid when she realizes his scheme, but he informs her “People don’t buy lady art”. In a way she’s torn as they start making a profit and living a comfortable life all the while knowing it’s a lie. The art galleries, media coverage, and the continued lies become all too much for Margaret to handle, while Walter continues down the rabbit hole of his new celebrity persona.

The names Margaret and Walter Keane may not sound familiar, but you may recognize the Big Eyes paintings. The film is based on true events, and for someone who is interested in art history, it provided a fascinating look into this story of art fraud, marriage, marketing, and greed. I was not familiar with the Keanes by name alone, but now I’m inspired to dig further into the real events and compare it to what may have been dramatized for the film.

Like I mentioned earlier, Burton has been stuck in a rut lately. He’s made some goofy adaptations and for someone that has such a distinct style and vision he’s been relying too heavily on CGI, Depp, and Bonham Carter to carry his films. With Big Eyes, he leaves all of that behind and while this may not look like a Burton film on the outside, you can definitely see why he would be attracted to this story. This is his first non-fiction film since 1994’s Ed Wood and is a return collaboration with that film’s screenwriters, Scott Alexander and Larry Karaszewski. The script feels a bit choppy at times as it tries to highlight the bigger events in the decade the film spans. It may feel rushed at the beginning, but it mirrors the abrupt choices Margaret makes and doesn’t let you ever ease in and feel that they have a good marriage.

Burton can be known for having wild characters in his film. He and Christoph Waltz (Django Unchained) keep Walter Keane a larger than life character without feeling like a caricature. Waltz gives another crazy performance where he continually has to be present and alive. It becomes a very physical performance going from the psychotic side to the comedic showy salesman persona he puts on in order to win others over. It’s the kind of theatrical performance that you expect out of Waltz. The courtroom scene is a prime example of the antics Waltz is able to throw himself into. Apparently they had to tone it down from what the real courtroom drama was like as it would have been too unbelievable. I feel like if any other actor would have portrayed him, it would be a completely different kind of character. It may seem like an odd pairing for him to be married to Amy Adams, but that’s the point of the story. Adams is always a reliable actor that can give a strong performance. She knocked it out of the ballpark last year in American Hustle. She isn’t given quite the range here, but there’s a warmth and vulnerability with her that you can easily root for.

Throughout the film I kept thinking about how Burton is trying really hard to do something different, and I applaud the effort. It’s like he wants you to know that he’s behind it as proof that it’s him, but he wants you to forget about the last decade by saying that he can do something else. The very bright and lively 1950s color palette is brought to life by the wonderful costumes of Colleen Atwood. Outside of his continual working relationship with Atwood, Burton somehow managed to lose his distinct vision. This is unfortunate as this is a film about expressive art. I think there’s a lot of room Burton could play around with while keeping it honest and true to the story. Big Eyes is a fine film due to the strengths of Adams and Waltz, but it doesn’t transcend to anything more than that.

Is It Worth Your Trip to the Movies? It won’t win any awards, but it’s an interesting story with sharp performances.