HALLOWEEN ENDS Director: David Gordon GreenStarring: Jamie Lee Curtis, Andi Matichak, Rohan Campbell, James Jude Courtney, Kyle Richards, Will Patton It’s all come down to this. Our Final Girl, Laurie Strode, vs Michael Myers for one last battle in Halloween Ends. It’s been four years since Michael Myers returned wreaking havoc on Laurie Strode’s life. He attacked the town of Haddonfield and killed Laurie’s daughter but hasn’t been seen since then. Jamie Lee Curtis is back for her final turn as Laurie who has tried to move on from the forty years of trauma. She’s now writing a book as part of her therapy, and END_OF_DOCUMENT_TOKEN_TO_BE_REPLACED

EVERYTHING EVERYWHERE ALL AT ONCE Directors: The DanielsStarring: Michelle Yeoh, Ke Huy Quan, Jamie Lee Curtis, James Hong, Stephanie Hsu If you are looking for a truly original film that will take you on a wild and unpredictable ride, then the new Michelle Yeoh film Everything Everywhere All at Once will leave you riveted. Michelle Yeoh’s character, Evelyn Wang, is going through what so many people are feeling. She’s struggling with that work, life, family balance. She runs a laundromat that’s behind on the bills and taxes. Her husband, played by Ke Huy Quan, is at his end looking for an out with a divorce. END_OF_DOCUMENT_TOKEN_TO_BE_REPLACED 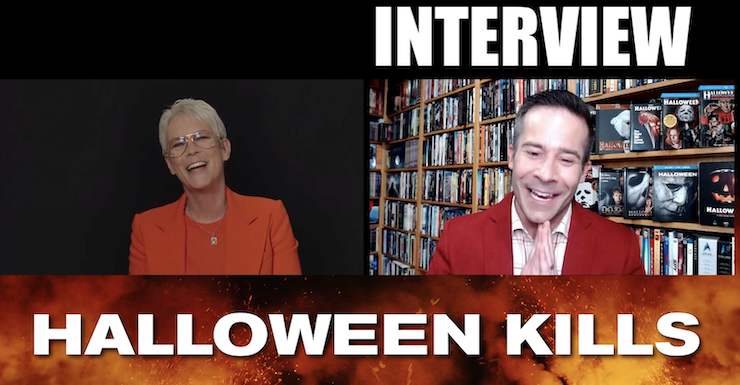 Jamie Lee Curtis Interview – HALLOWEEN KILLS and the Legacy of Michael Myers Jamie Lee Curtis is an icon in the horror genre thanks to her memorable role of Laurie Strode in the Halloween movies. If you’ve been following my work over the last decade, you know that Halloween is my favorite scary movie of all time. I’ve been obsessed with this franchise since I was far too young to be watching scary movies. I had the great honor to sit down with Curtis to talk about the latest in David Gordon Green’s new trilogy, Halloween Kills. We talk about having some of the original END_OF_DOCUMENT_TOKEN_TO_BE_REPLACED

HALLOWEEN KILLS Word started racing around Film Twitter on Thursday, June 24 that the new Halloween Kills trailer was attached to The Forever Purge. This lead to leaks from people who already saw that trailer and the teams at Universal Pictures and Blumhouse decided to release it ahead of schedule. I’ve watched it a few times now, and it does NOT disappoint! I will say that it looks pretty spoiler heavy in terms of explaining how Michael Myers gets out of the house that’s burning down as we saw at the end of Halloween (2018) and we get shots of some brutal kills. We get END_OF_DOCUMENT_TOKEN_TO_BE_REPLACED

A NEW TEASE OF “HALLOWEEN KILLS” Imagine my disappointment earlier this year when Universal Studios/Blumhouse Productions announced that Halloween Kills would have to wait until next Halloween, October 2021 before we would be able to see it. All because of the pandemic. The movie is shot, edited, and finished, but the studio and creative team want it shown in a theater with packed house. None of that is possible in 2020. Today marked the first virtual BlumFest. Head honcho Jason Blum invited us in on a variety of mini panels and conversations regarding a variety of their up and coming movies and TV series. It END_OF_DOCUMENT_TOKEN_TO_BE_REPLACED

HALLOWEEN KILLS Director:  David Gordon GreenStarring: Jamie Lee Curtis, Judy Greer, Andi Matichak, Anthony Michael Hall, Kyle Richards, Charles Cyphers, Nancy Stephens, Robert Longstreet One of the movies I WAS most looking forward to in 2020 is Halloween Kills. This should come as no surprise for readers given my obsession with the Halloween franchise. I’ve done many write ups and a podcast episode about it over the years, and the recent sequel met all of my high expectations. The excitement for us Halloween fans is sky high with the return of many familiar faces from the original film like Kyle Richards, Charles Cyphers, and Nancy END_OF_DOCUMENT_TOKEN_TO_BE_REPLACED

LIONSGATE A NIGHT AT THE MOVIES! LIVE Do you want to bring back Friday night the movies? “Lionsgate Live!’ is just for you.  Beginning this Friday, and continuing for four weeks, Lionsgate will team with Fandango and YouTube to stream four movies for free: Friday, April 17 – The Hunger Games Friday, April 24 – Dirty Dancing Friday, May 1 – La La Land Friday, May 8 – John Wick Per the press release, “Lionsgate Live! A Night at the Movies will be hosted by Jamie Lee Curtis. Curtis will share her own movie memories as she is joined by special guest celebrities and YouTube END_OF_DOCUMENT_TOKEN_TO_BE_REPLACED 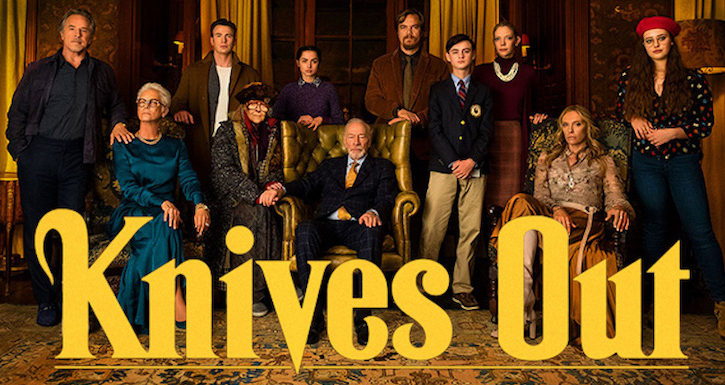 KNIVES OUT Writer/Director: Rian JohnsonStarring: Christopher Plummer, Jamie Lee Curtis, Daniel Craig, Chris Evans, Don Johnson, Toni Collette, Ana de Armas, Michael Shannon, LaKeith Stanfield Christopher Plummer heads the cast as patriarch Harlan Thrombey who is described one of the best selling mystery writers of all time. He’s massively rich living a gorgeous palatial estate. His large family gathers to celebrate his 85th birthday, but the next morning Harlan is found dead in his study. Daniel Craig’s Detective Benoit Blanc is suspicious and believes this was a murder. But who did it? Someone in his family, his caregiver, or what was it suicide? Here’s my END_OF_DOCUMENT_TOKEN_TO_BE_REPLACED