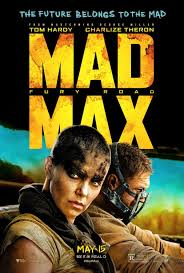 I first heard about Mad Max: Fury Road years ago when it first went into production. The big Mel Gibson franchise was getting a reboot without its star. Where have we seen that before? A couple of years passed as we patiently waited for any updates. What was taking writer/director George Miller so long to finish the film? After seeing the final product in 2D, rest assured that it was well worth the wait. Tom Hardy takes over Mel’s role as Max Rockatansky. He was once a road warrior but is now tormented by visions of his past. To make matters even worse, he’s being held prisoner by the savages who are living under the rule of King Immortan Joe (Keays-Byrne). He’s not one to remain at ease while living tied up with a chained apparatus around his face. He’s also not the only renegade looking to escape. In the vast desert that makes up their land, Furiosa (Theron) makes a break for it by driving off the given path in her war rig. She’s attempting to save a group of women known as the Wives who are used by Joe for breeding purposes. Word carries quickly of Furiosa’s getaway, and Joe unleashes his men to hunt her down. Max manages to escape the clutches of Joe’s henchmen, and joins Furiosa’s escape plan in an all-out war hoping to survive and find that beacon of hope and redemption.

I’m sure I will be shamed for the following statement, but I will admit that I haven’t seen the original Mad Max trilogy, which was also created by George Miller. I debated about watching them before going into this film, but I wanted to see this one fresh without any preconceived notions of what we should be expecting out of it. Yes, I may have had a better understanding of the vision of Miller’s post-apocalyptic world, but Fury Road stands on its own accord. I never felt lost or confused like I was missing out on some backstory. Frankly, the plot is not the reason why people are seeing this movie.

From the trailer alone, you can see and feel the audacious risks Miller took while making this movie. It’s one of those films that defies being labeled in a specific genre as it morphs from one design element to the next without ever feeling like it’s a garbled mess of styles. The hair and make-up design is dirty and gritty for Max and Furiosa, but on the other side, Immortan Joe is absolutely frightening with his long hair, pasty skin, and his breathing mask fixed with teeth. His War Boys, including Nicholas Hoult’s sadistic Nux, are bald and emaciated with battle scars and tribal tattoos. Cinematographer John Seale (The English Patient, Cold Mountain) and production designer Colin Gibson have created such visually jaw-dropping imagery that further deepens the rich look of the film and enhances that overall feeling of living and breathing in this desert. There are blazing hot reds, oranges, and browns used in the majority of the day scenes that literally make you feel hot watching the movie, but shifts to deep blues and grays during the night scenes. When it comes to the war rigs used throughout, Miller and his crew have created the most elaborate and tricked out vehicles you have ever seen in a movie. I’m not talking about a muscle car with an extra engine. These car/truck hybrids are beasts that make “Pimp My Ride” look like a child’s play toy. These rigs are like vintage cars with monster truck tires, massive back ends, spikes popping out, or even catapults on top. I can’t even describe the freak nature of them.

The whole movie is one massive visual drug trip. It may take some time to adjust to the style and bizarre tone, but stay with it. It’s one of the few times I actually felt like the director was telling this story through the visuals instead of through the script. Frankly, the dialogue is quite minimal at times as the majority of the film is one long chase sequence. You can tell that each frame was storyboarded and each action sequence was meticulously choreographed. I applaud Miller for being so daring by using practical effects as much as possible. I’ve lamented in the past when directors cheapen out by taking the CGI route, which is why I revel in a film like this one or The Fast and the Furious franchise where we can see the true stunt work at hand. The sequences are so elaborate and daring that I was truly baffled at how they were able to pull it off. That mystery and intrigue is what makes these kinds of movies magical and artistic. There is so much going one at any given time, yet Miller never loses focus as a filmmaker. He never lets the action get out of hand. Your eyes are glued to the screen the entire time. There’s no checking of the watch or daydreaming of what you need to do when you get home.

It’s hard not to think Tom Hardy may be channeling Bane (his character from The Dark Knight Rises) with the face muzzle and low gravely voice. I have a deep respect for him as an actor as he always seems to find that inner core of any character where he’ll keep his outer appearance a bit guarded, but you know a fire is brewing inside. Charlize Theron will end up being the one audience members talk about afterwards. She makes Furiosa this badass heroine of the highest regard that would fit right in with Alien’s Ellen Ripley and The Terminator’s Sarah Conner. If you look at her filmography, she’s one hell of a chameleon that can literally tackle any genre without showing off about it. I agree with my husband that it would be fun to see her and Hardy do a really smart rom-com next just to see them tackle something completely different. Zoe Kravitz (Divergent), Rosie Huntington-Whiteley (Transformers: Dark of the Moon), and Riley Keough (Magic Mike) stand by Theron’s side as three of the wives. As Immortan Joe, Hugh Keays-Byrne returns to the series after playing Toecutter in the first film.

Mad Max: Fury Road could very well be the best action film of the year. Do not be surprised if it makes my Best of 2015 list. George Miller is back with one crazy bonkers ride that I can’t wait to go on again. It’s sharp, original, and unlike anything else I’ve seen in quite some time. I would love to see it showered with Oscar nominations for its design and technical achievements.

Is It Worth Your Trip to the Movies? It may not be for everyone, but if you give it a chance, you’ll be blown away.