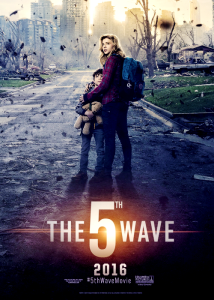 Just when I thought the YA genre of teen lit was winding down, we get another series getting the big screen treatment. This time we have Chloë Grace Moretz in the Jennifer Lawrence/Shailene Woodley/Kristen Stewart role. She plays Cassie who’s your standard teenage girl going to parties and comparing cell phone cases with Ben Parish (Robinson), a cute boy in her class. That all comes crashing down the very next day when an alien spaceship appears and causes waves of destruction to Earth in the form of darkness, earthquakes, viruses, etc… You get the picture. The alien species is referred to as the “Others” by the military. They take control over the remaining survivors by turning the children and teens into soldiers. Cassie finds herself on the run in order to save her brother Sam (Arthur) who has been taken in by the military. Her growing fear and suspicion continues to rise to the point where she can’t trust anyone along the way. Not even Evan Walker (Roe), who becomes the other cute boy in the picture after he comes to her rescue.

The 5th Wave is an adaptation of the first book in a three part series by Rick Yancey. It seems like most YA series come as a trilogy. I admit to liking the genre and think that the best ones can cross age demographics and lead to a broader appeal. Do they have to? No, I suppose not. If that’s the case, then maybe they should just stick to that medium. There’s nothing wrong with picking up a teen soap book and whipping through it. If they are being translated to the big screen, I would hope there’s enough juice and creativity in the material to warrant a trilogy of movies. These movies aren’t cheap to make, so studios would have to trust that the end product would reach The Hunger Games level of box office receipts in order to justify making it. Right? If not, then we’re stuck with one film and no resolution as the audiences have started to grow tired with this genre and if the first one sucks then they’re not going to justify coming out for part two. I have a hunch that is what is going to happen with this potential franchise.

This was the resounding thought I had throughout The 5th Wave as it feels like every other teen-post-Apocalyptic story out there. You’ll reminisce back to The Hunger Games and Divergent with some Independence Day and Outbreak thrown in there for good measure. As you can see, this boils down to the fact that nothing in the movie feels fresh or original. If you’ve read or seen any other YA adaptations, you can practically predict what’s going to happen along the way. There are your standard fighting teens, rebellion against a government authority figure/regime, and the kids are all given nicknames like Ringer, Dumbo, and Zombie. Last but not least, we our treated to a standard love triangle between Cassie, Ben, and Evan that is just starting to bloom.

What made some of those other YA series stand out are their unique characters who have something to fight for. The characters here are very standard and clichéd. The film boasts three screenwriters (including Oscar winner Akiva Goldsman) but the dialogue is quite terrible at times. I don’t know who is to blame in this regard. Is it the work done by the screenwriters or were they relying too heavily on author Rick Yancey’s text? I would like to assume that Goldsman was brought in as a script fixer. J Blakeson’s (The Disappearance of Alice Creed) direction leads to some severely melodramatic moments. There was an audible laugh/groan at one point from the audience I saw it with when there shouldn’t have been given the context of the scene. Let’s just say that lipstick is involved. One of my eye rolling moments came with Liev Schreiber who’s the main man in charge of the military group corralling all of the young men and women. He has one of those heroic and inspiring speeches that he delivers all too sternly like a coach wanting to win the big game or a president declaring it’s the end of the world. His wife Naomi Watts is in the Divergent series, so maybe he felt like he needed his own YA series to star in.

Chloë Grace Moretz does her best at trying to keep Cassie down to earth and someone to root for. She doesn’t quite have those kick-butt action heroine qualities yet, but maybe we’ll see them down the road. I feel she’s still trying to find the roles she’s right for as she transitions from kid actor to an adult. She broke onto the scene with Kick-Ass and has done a variety of character types since then including the unnecessary Carrie remake, Hugo, Dark Shadows, and 2014’s If I Stay. She is joined by Nick Robinson (Jurassic World) and Alex Roe as her potential love interests. Maria Bello pops up in a minor role joining Schreiber as members of the military. Both overact their way through many of their scenes.

The 5th Wave could very well appeal to its core audience, but I highly doubt that it will reach beyond that. Quite frankly, I found it quite boring and proof that we can stop adapting YA books for the big screen. I’ll be very curious if this does well at the box office and if the other books in the series get made into movies.

Is It Worth Your Trip to the Movies? Only if you’ve read the books and love the material.