I first saw Joan Rivers: A Piece of Work a couple of years ago when it first started streaming on Netflix. I had a second viewing of it tonight, but this time there was a somber tone underneath it due to her recent passing. She died at the age of 81, but she was 75 when she was filming the 2010 documentary. For someone that has had their fair share of ups and downs in show business, she opens up about the drive, passion, and commitment she has toward what she does. There are days where I think I am busy. I’m only 31 and wonder why I stuff my calendar so full with various activities, events, or gatherings. I can’t imagine being her age and continuing to live such an active lifestyle. For her, she wouldn’t know what to do otherwise. There is a scene early on where she’s going through her calendar and you see how penciled in each day was for the month and in the upcoming months there are days that are blank with nothing filled in. She lived in fear of an empty calendar. “…nobody wants me. Nobody cares.” She felt a need to work in order to stay relevant and appreciated.

Many people probably know her best as a foul-mouthed comedienne or red carpet fashion commentator. That was never what she set out to do, because she always saw herself as an actress first and foremost. She took acting very seriously and wanted to be known as an actress. My first memories of Joan are as an actress as I grew up watching Spaceballs where she provided the voice of Dot Matrix, the C3PO type character. Early on in her career she co-wrote and appeared in a play called Fun City and was ripped apart for it. Those negative reviews severely damaged her. Part of the documentary focuses on her opening a play based on her life that toured Edinburgh and London. She was very cautious of taking it to New York or Los Angeles because she didn’t want criticism regarding her acting. She had no problems if people ripped apart other aspects of her career, but she didn’t want them touching what she cherished the most. 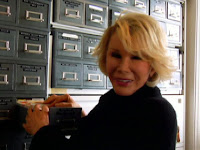 It is quite clear that she was one of the hardest working people in the business. As the camera pans her lofty Maria Antoinette style apartment, it stops upon the filing cabinets full of jokes. There is something astonishing about the fact that she always wrote down her jokes and filed them away. She never wanted to forget them, so she jotted them down in notebooks, on cards, or on other random pieces of paper. She pulls a random joke out of a filing drawer and reads it to the camera. Who knows when she wrote it, but it was still funny as there is a timeless quality to her humor. This is also evident in the multitude of clips of her standup routine. I admire her fearlessness and her audacity to never hold back in the name of comedy. No subject was ever out of bounds. No matter how politically incorrect, crass, or inappropriate it was, she would deliver the joke and stand up for it. She frequently raised eyebrows and would get lambasted for the shockingly vulgar things that she would say. She always believed that was what women should be talking about.

Joan Rivers: A Piece of Work showcases Joan the person versus Joan the persona who we typically see her being. This is an insightful and fascinating look at the internal pain and struggle she faced in her life and what drove her to continue working. The film covers the shocking suicide of her husband Edgar. Due to the fact that he was a part of her business, she was left without a career, bad debts, sadness, darkness, and also became a single mother after the tragedy. This also came after she was banned from The Tonight Show by her one time friend Johnny Carson despite having been on the show for over twenty years. Even after all of those years of being on the highest of highs and the lowest of lows, you can sense that there was still a vulnerability with Joan. The film also provides a peak into her philanthropic side. There is a very generous side to her that is very rarely showed and discussed. She was very grateful for everything she had in life and always felt very blessed with what she had been given. She loved giving back and helping others by hosting Thanksgiving dinner for a big group of friends and family as well as delivering meals for God’s Love We Deliver which helped HIV/AIDS patients in need.

We lost one hell of a trailblazer when Joan passed away. This documentary is a great way for people who may not know a lot about her life to see a different side of her. Kathy Griffin is interviewed and states how she was a pioneer for female comics. I don’t think we will ever see a comedian these days that could get away with half of the things Joan did. You can catch this rare look into Joan’s life through Netflix Streaming if you have that service. Be warned, the language is extremely R-rated. You will no doubt laugh, and maybe even lower your head in shame for laughing so hard at what this 75 year old dares to say out loud.

Is It Worth Your Trip to the Movies? If you didn’t know Joan before, you may end up having a better appreciation for her.