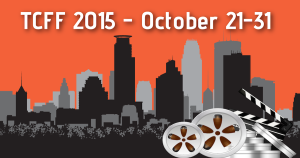 The Twin Cities Film Fest is upon us, and executive director Jatin Setia has delivered one of the best line-ups I’ve seen from the festival. The festival runs October 21-31, 2015 at the ShowPlace Icon Theaters at the Shops of West End in St. Louis Park, MN. Setia and Artistic Director Steve Snyder present a diverse line-up of studio films, independents, Minnesota made, documentaries, shorts, web series, and more. There is literally a film for any sort of moviegoer. The festival also features red carpet events including filmmaker interviews, mixers, and discussion panels. One big event includes a special dedication to actor John Hawkes who will be in town for the event. The festival will be showing his film Too Late on October 27 as their centerpiece gala as well bonus presentations of his earlier films: Winter’s Bone (October 29) and Me and You and Everyone We Know (October 30).

This will be my third year attending, but it’s extra special, as I will be participating as both a critic and as an actor. I’m excited to say that I am part of the cast of The Caper by writer/director Matthew G. Anderson. It will be showing as part of the “Love American Style” shorts block on Wednesday, October 28th. Anderson will also be presenting his web series Theater People as part of the festival’s new block dedicated to web series. Anderson will be showing Theater People: Season 3 Episode 1. If you like Theater People, the rest of the season will be released at the end of October, and I have a cameo as a gullible cop in the second episode.

Tickets can be purchased individually ranging from $12 for most of the movies shown and $20 for the opening, centerpiece, and closing night gala films. The big studio films like Brooklyn, Room, Too Late, Youth, Anomalisa, The 33, and The Adderall Diaries are part of the $20 gala films. Some of these are receiving rave reviews and could be Oscar bait. Multi-film passes can be purchased at a variety of price points. The Silver pass is $50 for five films, the Gold pass is $80 for ten films, and the Platinum pass will get you twelve films and two tickets to an open, closing, or gala film for $120.

WHAT: 2015 Twin Cities Film Fest
WHERE: ShowPlace Icon Theaters as Shops at West End, St. Louis Park, MN 55426
WHEN: October 21-31, 2015
HOW MUCH: $12-20
WHY: See a wide variety of films that you normally wouldn’t see in a theater. Plus, you can brag about seeing Oscar bait movies before everybody else.

You can find the full lineup here:
http://twincitiesfilmfest.org/films/

Here are trailers for some of the films:

RAIDERS! THE STORY OF THE GREATEST FAN FILM EVERY MADE (Wednesday, October 28)

THE CAPER, as seen in the “Love American Style” shorts block (Wednesday, October 28)