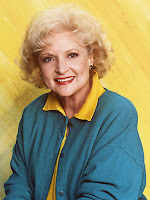 Did everyone watch Saturday Night Live this weekend with the fabulous BETTY WHITE? They brought back some of the funniest ladies from the past ten years and it was such a hysterical show. Seriously one of the best SNLs in a long long time. Previous to SNL, I was watching a GOLDEN GIRLS marathon on the WE channel while I prepared the strata I made for breakfast. There’s something about watching The GGs that puts me in a terrific mood and relaxes me. The humor is so funny, sharp, and shocking at times. Watching those four women deliver jokes with perfect timing is only something I could dream of doing. It seems like nowadays people’s level of humor has dumbed down severely, so it’s terrific to see people acknowledging the comedic ingeniousness that is Betty White. There was a moment during SNL where all the cast members sang “Thank You for Being a Friend”. It was so heartwarming and wonderful.

I know I’ve said it before and I will keep saying it, but Meryl Streep is a god. She seriously can do no wrong. I just re-watched IT’S COMPLICATED and the making-of featurette. It’s not a perfect movie by any means, but it’s proof that she is captivating to watch no matter if it’s a heavy drama or something light and fluffy like this movie.

Today is Mothers Day which meant another fun family meal. Today’s meal was a brunch with strata and hash browns made by yours truly. One of my goals for 2010 was to make 10 new recipes and the strata was definitely one to add to the list. It was just wonderful to see Ma and Grams again today. Grams hasn’t been doing well lately, but she is one hell of a trooper and fighter. I think I would have given up by know if it was me. Given what she’s been going through, she still has her wit about it. She’s 86.5 which is two years younger than Betty. God, I hope I still have some wit left when I’m her age; if I even make it that far.

Alright alright. Enough of my blabbing…