We all have an idea of who Maleficent is from the tale of Sleeping Beauty. Disney has taken one of the most diabolical villains and put a fresh twist on a character we all thought we knew. Maleficent (Jolie) is a powerful fairy who lives in the trees of a magical kingdom called The Moors that borders the human kingdom. She has two horns and gigantic wings enabling her to fly all over the kingdom, and her lively spirit fits right in with the other mythical creatures around her. One fateful night, her wings are burned off which sets in motion a vengeful plot against the person that committed the act. 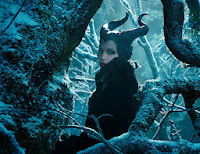 Through the help of her servant Diaval (Riley), Maleficent learns that the cruel act was committed by the new king (Copley) in order to become the heir to the throne. As an act of revenge for his betrayal, she decides to put a curse on his newborn daughter, Aurora, who on her sixteenth birthday will fall into a deep sleep after being pricked by a spinning wheel. A kiss from her one true love will be the only way to break the curse. Even though Aurora is raised by three pixies, Maleficent continues to keep an eye on her from afar. She may not be as evil as she is often portrayed to be as a maternal side of her starts to appear after the innocent Aurora (Fanning) grows up and could be the key to peace between the two kingdoms.

Maleficent is similar to previous Disney live action movies like Alice in Wonderland and Oz, The Great and Powerful where they reimagine a classic story in a CGI heavy movie. Even though the trailers looked pretty promising I went in with a bit of hesitation as I didn’t want to be burned like I was with both of those wretched films. The naysayers should have no fear as Maleficent is leagues better than both of those, but it doesn’t take much. I wasn’t as bothered by the blatant use of special effects versus realistic sets and effects. The dark and gothic tones seem to work better with the CGI than the bright and colorful palette those other movies used. I still rolled my eyes at some of the Moor creatures and wish they would have treated the pixies a bit differently. They are a weird mix of animation while keeping the faces of Imelda Staunton, Juno Temple, and Lesley Manville. Frankly, I would have been fine with them attempting the Julia Roberts in Hook approach.

Angelina Jolie is the reason to see the movie. How can you NOT be Team Angelina? She brings this heightened, wickedly fun performance to Maleficent. She has a nice blend of being a bit scary and menacing, while not being too cartoonish or over the top. You can tell she is having a hell of a good time playing this character which makes the movie all the more enjoyable. The designers pulled out all the stops to give Maleficent the royal treatment as it is quite evident that so much care and attention is put into the character. The costume design by Anna B. Sheppard (Inglourious Basterds, Captain America: The First Avenger) is exquisite with its sharp and hard structure. The hair and make-up design compliments that quite well and still fits the look of the Disney villain we know and love. The lighting and shadow effects easily pull you into the mystery surrounding her. There is even an ode to the classic Maleficent silhouette.

The story is a bit simple, and I wish more attention would have been made to character development. It gets a bit lost as the attention seems to all go toward Maleficent and the special effects that were needed. I understand she is the title character, but I wish some of the other characters were written with the same juicy material Maleficent was given. It’s almost as if they didn’t want to pull any focus away from her at any point during the movie. Many of the characters like Sharlto Copley’s King and Brenton Thwaites’ Prince Phillip are pretty plain and generic. Elle Fanning brings that sweet, innocent, and angelic spirit about her that she always has to Princess Aurora. Yes, that is Vivienne Jolie-Pitt who has a cameo as the younger Aurora. There is no denying that she looks exactly like Brad and Angelina. Imelda Staunton, Juno Temple, and Lesley Manville are all talented actresses, but I wish screenwriter Linda Woolverton would have gone even further with the ditzy and klutzy aspects about the pixies to make them the scene-stealers they should be.

Maleficent is a marked improvement over some of those other CGI heavy Disney live action movies, but it is still missing the mark at times. I recommend seeing the movie in 2D as the copious use of CGI special effects may be ruined with gimmicky post-production 3D crap. If it wasn’t for Angelina Jolie, this would have been another bloated CGI mess. I can’t imagine another actress in this role. A fair warning that the darker tones and approach will be too scary for little kids. It’s not as kid friendly as other live action Disney movies.

Is it worth your trip to the movies? Angelina Jolie makes the movie worth seeing even though it had the potential to be far better than it turned out to be.