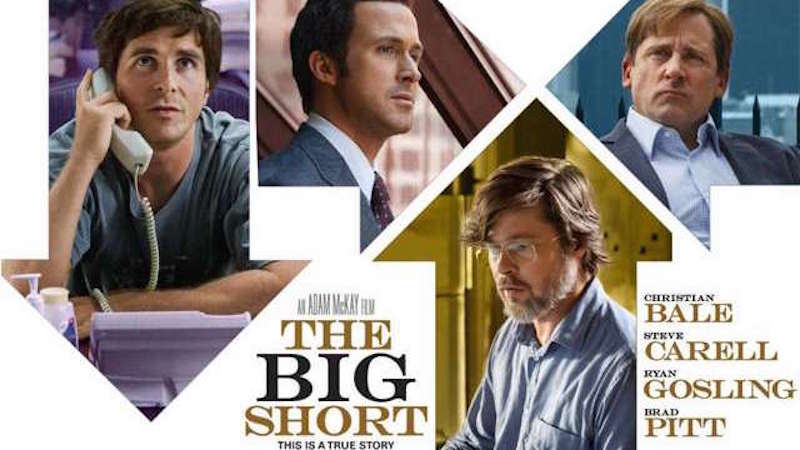 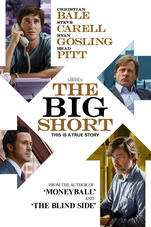 If you saw The Wolf of Wall Street, it gave a heavy, behind the scenes look at a horrible stockbroker that stole money from innocent people to rake in the profits. The Big Short tackles the banking industry and will further cement those awful hidden truths of the industry except with 90% less profanity. 2008 saw the largest financial crisis that shook the lives of millions of Americans. It crashed the housing market and pummeled big banks as a result. Mortgage-based security came crashing down and only a few guys saw it coming. Michael Burry (Bale) was the initial analyst that started to dive in deep into the numbers of the mortgage backed loans. He came up a plan to short it with a concept called “credit default swap” as a way to bet against the housing market. He’s the kind of guy fueled by heavy metal music blaring at top decibels in the middle of his office. He’s not one to go up against.

Ryan Gosling’s Jared Vennett is a young Wall Street banker from Deutsche Bank. He believes Burry’s theory and goes to various banks to warn them. He, in turn, gets laughed at for this ridiculous idea as the housing market is actually booming. His next target it Mark Baum (Carell), a hedge-fund manager who teeters on the brink of collapse himself. Jared uses a flashy demonstration with Jenga blocks in hopes of convincing Mark to invest in the credit default swap. Then there’s Ben Rickert (Pitt), who’s done with the banking world but gets roped back in and acts as a mentor for two young businessmen (Wittrock and Magaro) who come across Vennett’s plan and need some assistance for their own plan of attack.

Have I lost you yet? It’s a big complicated movie for anyone that doesn’t read the business section of the paper on a daily basis. It delves into some meaty and financially unstable concepts with business jargon thrown around every other word. The movie tells us out in the open that all the business speak is meant to be confusing. It’s meant to screw over the innocent and uninformed Americans thanks to crooked men doing crooked deals. I’ll admit, the film went over my head many times. That doesn’t mean that it wasn’t effective or didn’t get the point across. It’s still entertaining and showcases the awful behavior at hand.

Michael Lewis, who brought us other non-fiction stories like The Blind Side and Moneyball, wrote the book for which the book is based. It’s the kind of film you would expect to have been written by Aaron Sorkin, which would then go 100 miles an hour. Instead, it’s been adapted Adam McKay and Charles Randolph (Love & Other Drugs). Yes, that same Adam McKay who brought us Anchorman and Step Brothers. The Big Short is on the other side of the spectrum from those two. McKay’s involvement helps bring out the absurdity behind it all. He plays some of it for laughs in a satirical approach. Frankly, I’d like to see more of this side of McKay instead of the dopey Step Brothers types of movies he makes. McKay and Randolph use a variety of tactics to keep the audience invested without going over everyone’s head. They take Ryan Gosling’s character and make him the narrator with him breaking the fourth wall and addressing the camera straight on. They also enlist people like Margot Robbie, Anthony Bourdain, and Selena Gomez to cameo as themselves and give metaphors in order to explain what is happening in the movie.

McKay has assembled a big cast with Steve Carell, Christian Bale, Ryan Gosling, and Brad Pitt as the four main heavyweights of this story. Pitt also serves as producer of the film. Carell is continuing his streak of taking on meatier roles. He’s worked with McKay before on the Anchorman movies, but Mark Baum is nowhere near his character of Brick Tamland. Baum believes everyone is up to no good. He hates Wall Street, refuses to acknowledge his hates his job, or the fact that he’s miserable. He suffers from mental health issues ever since his brother’s death. He’s a loose canon in a way that Carell is great at playing. Christian Bale gives another “all in” kind of performance that we expect from him. He beats to his own drum and oftentimes has to carry his scenes by himself.

Try not to get too lost with the frequent use of such terms like subprime bonds and CDOs (collaterized debt obligation). Just allow yourself to go down a deep rabbit hole of corruption that is The Big Short. It’s intercut with pop culture videos, interviews, and music from those years as a way to showcase the ever busy, every crazy, A.D.D. world we now live in. It was a scary time, but all too true. Of course, some of it is heightened and writers McKay and Randolph even admit when they taking dramatic liberties with what is true. It asks a good question on whether or not you expose the truth and right a wrong knowing it will ruin millions of lives in the process.

Is It Worth Your Trip to the Movies? Your money will be well spent on The Big Short.