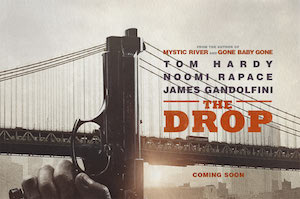 How can you go wrong when James Gandolfini and Tom Hardy star in a Dennis Lehane story? Bob (Hardy) has an innocence about him despite the fact that he works at a Brooklyn bar known in the underworld for being a drop location as money is handed off to local Chechen gangsters. There is a whole system in place for the covert operation that goes unseen by the general bar clientele. He works for his cousin Marv (Gandolfini) who is fully aware of the operations that take place at the bar. He once ran the place, but it’s now under control of the gangsters. One night the bar is robbed by two masked gunmen, and Bob and Marv find themselves stuck answering (or not) the cops continual questions while knowing the Chechens will want the missing money paid back. This isn’t Bob’s only issue at hand. He meets Nadia (Rapace) after rescuing an abused pitbull that was abandoned in her garbage can. Their friendship is tested when her ex-boyfriend and owner of the dog shows up and brings along a violent past.

You are probably familiar with novelist Dennis Lehane whose novels Mystic River, Gone Baby Gone, and Shutter Island have all received the silver screen treatment. This is the first time he has ventured into screenwriting and has expanded his short story Animal Rescue. This time he trades in his typical Boston neighborhood for the local bar scene in Brooklyn. According to him, this was a studio choice as we have already seen numerous Boston crime stories. He was fine with the change, but let’s not pretend that Brooklyn was the most creative alternative location. He and director Michaël R. Roskam set the stage very early on that you can’t trust anyone involved. There’s a heightened level of suspicion that anyone could snap into a violent outburst. You never know who’s working for who, who is looking out for themselves, or who may turn on another character.

Lehane was pretty involved in the making of the film, but only had one request when it came to casting. The only actor he had envisioned for the role of Cousin Marv was the brilliant James Gandolfini. I still have a hard time believing that he passed away. The Drop will be remembered for marking the last screen appearance for Gandolfini. It’s a gritty role that he has always been strong at playing, yet I never got the feeling that I was just watching Tony Soprano on screen. Marv has this constant dry wit about him. Many of his lines are sarcastic rebuttals and Gandolfini is perfect at their delivery. I think people will be mixed with his performance. If they are like me, they will get on board with the fact Gandolfini’s last role is another crooked guy mixed up in an underworld of gangsters. He was a gifted actor that knew how to play the subtleties with each character. Others may feel like we have seen this numerous times from him. He always carries with him an intensity to keep you invested in the moment. 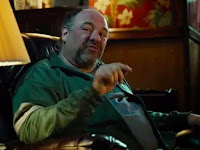 Tom Hardy (Warrior, Lawless) continues to do meaty work. How is he not on everybody’s radar yet? He has this rough, brutish exterior but he channels the calm and cool interior making himself this force of nature that keeps you guessing at his true intentions and motivations. Bob has a simple, nurturing mentality that seems all too good to be true if he’s always surrounded by these thugs at the bar. I love his continual choices of playing these complex characters that are have these misunderstood vulnerable aspects to them. They aren’t just the tough guys that would fit Hardy’s stature and outward demeanor. Hardy received flack for his voice as Bane in The Dark Knight Rises, and his tone here is a bit under the breath. I didn’t have a problem, but I wouldn’t be surprised if people have a hard time understanding him. Noomi Rapace (the Swedish version of The Girl with the Dragon Tattoo trilogy) plays off Hardy well. She’s another actor that gravitates towards damaged characters and can easily flip between the loneliness of Nadia into her crazier side in a split second.

The film’s drive comes from the characters and their relationships with each other and the idea of who’s playing who. The actual details behind the idea of the drops and the specific crime at hand doesn’t feel as fleshed out as we’ve seen in other films like this. It’s far more character driven than action driven. Even the pitbull plays a big part of the movie. It seems pretty evident that he symbolizes the misunderstood aspects regarding Tom Hardy’s character. Plus, the dog is so adorable you just can’t help but feel sympathy toward him every moment he’s on screen. Hardy, Gandolfini, and Rapace all deliver strong performances that keep you intrigued as you wonder who may explode first or who’s going to be the strong valiant type.

Is It worth Your Trip to the Movies? You may find the movie slow at times, but the twists and climax make for a great payoff.