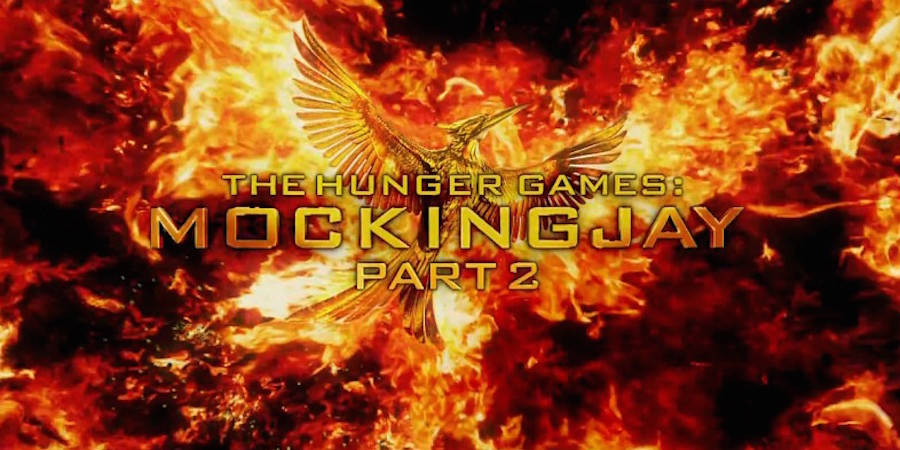 It’s all come down to this for Katniss Everdeen (Lawrence) who was given the title of the Mockingjay. She is seen as the face of the Panem’s rebellion against President Snow (Sutherland) and the Capitol. When we last saw our heroine, she was being strangled by her friend, Peeta (Hutcherson). He is now currently being held in solitary confinement to regain his memory after being brainwashed by Snow. This along with other personal losses along the way is the catalyst in her determination to defeat his reign of power. She is tasked with going to the remaining districts in order to get them to join the rebellion. At District 2, she is shot down and believed to be dead. Panem’s leader Alma Coin (Moore) and gamemaker Plutarch Heavensbee (Hoffman) want her to lie low and hidden. She is too strong-willed to stay in hiding and decides to go rogue. Fellow friends and tributes join her as they march their way to the grounds of the Capitol battling guards, traps, creatures, and even death along the way.

If you’ve been following along with the franchise, you know this is the fourth and final film in The Hunger Games series, which is based on the young adult book series by Suzanne Collins. Frankly, it’s one of the better YA stories out there. It’s a hot genre with many series trying to get the big screen treatment. Not many fully work, with The Hunger Games being an exception. I actually enjoy the movies of Mockingjay far more than the book itself. How often do you hear that? What I will say is that I still frown and grumble over the money-grabbing nature of the studio to split up a relatively short book into two films. Yes, it works as we all fall hook, line, and sinker and plop down the money for both parts. Cinematically, it doesn’t always work as there isn’t enough from the source material to warrant it. We learned that with Twilight and The Hobbit films. I’d prefer seeing one longer film that’s jam packed with action and excitement than two films that seem to have filler and an unnecessary runtime. Mockingjay Part 2 runs over two hours which is excessive in terms of storytelling.

Author Suzanne Collins was involved with the adaptation of the screenplay with splitting the final book into two films. Part 1’s scribes Peter Craig and Danny Strong are back to finish Part 2 which picks up right where Part 1 ended. There’s no exposition or recap given to set the scene. This also means you really need to have a firm understanding of what has been happening so far as the story of this film doesn’t really stand on its own. It’s a challenge to even focus on this film in its own context without thinking about Part 1 and the series as a whole. Part 2 continues on with the darker themes and the muted and desolate atmosphere. Due to the battle-style natural of the film, it’s probably the most violent and darkest film. The design elements are still intact just with a different look to them. The stakes are at their highest for Katniss, and it gets quite stressful at times when you realize that Suzanne Collins is not afraid to kill off beloved characters. There’s a great scene involving a black oil-like liquid that gushes out putting the tributes in jeopardy. That’s just one of the many traps set in place they have to navigate around.

Collins’ characters will surely be missed. Just like in the Harry Potter series, we have a strong supporting cast with Woody Harrelson, Julianne Moore, Stanley Tucci and Donald Sutherland. Elizabeth Banks closes out her stellar year with Effie Trinket who is back in those lavish costumes designed by Kurt and Bart. The film also marks the final screen appearance by Philip Seymour Hoffman. It was quite alarming when he pops up within the first few minutes. There’s sadness present when you remember he’s no longer with us. There are a couple of moments where I questioned if they were filmed or altered after his death.

Jennifer Lawrence is a huge reason why these movies are so successful. In this one, you really see the flawed side of Katniss. She’s worn out but never loses hope and determination. Lawrence keeps her grounded, likeable, and someone who you root for. She’s not some mopey teen in a love triangle. Okay, so maybe there’s a little bit of that between Josh Hutcherson’s Peeta and Liam Hemsworth’s Gale. Personally, I’m Team Peeta. However, it’s not the focus of the story. She gets to be this brave, kick-ass, and confident character that can be a role model for the young moviegoers who want to look up to her. As we’ve seen with the other films in the franchise and her other work in Silver Linings Playbook, American Hustle, or Winter’s Bone, she’s a strong actress that can bring complexity to this character that isn’t always present in the books.

The Hunger Games: Mockingjay Part 2 is not my favorite film in the series. Does that mean it’s bad? No, not at all. There are some great chases and action sequences, and there are plenty of moments where you want to cheer Katniss on in her defeat of Snow. It just doesn’t really feel like it has its own entity. Do yourself a favor and re-watch Mockingjay Part 1. You’ll feel more in sync with Part 2 if those events are fresh on the mind.

Is It Worth Your Trip to the Movies? Don’t worry; Part 2 is a satisfying conclusion for all the Hunger Games fans out there.

2015-11-19
Previous Post: AN INTERVIEW WITH CRAIG SCHULZ AND STEVE MARTINO FROM “THE PEANUTS MOVIE”
Next Post: Movie Review: BROOKLYN