Movie Review: THE PERKS OF BEING A WALLFLOWER

Charlie (Lerman) is only a freshman and he has already had a life most high schoolers have not experienced. On the outside, he seems to come from a traditional family with normal parents (Walsh and McDermott), his older sister Candace (Dobrev) who is a senior, and an older brother who is off in college. On the inside, he believes his parents do not understand him, his one and only friend has recently committed suicide, and he is continually flooded by memories of his Aunt Helen (Melanie Lynskey). He has also spent time in a treatment facility for mental illness. His only way of dealing with his troubles is by writing letters to an anonymous “Dear Friend”.

For a student like Charlie, his first day of freshman year is awkward and frustrating. He wants to lay low and blend in, but all the while he feels like he stands out for being the crazy one. In his English class, he knows all the right answers but won’t participate. Mr. Anderson (Rudd) sees the spark in his eye and pulls him aside after class. A connection is formed between the two, even though Charlie is apprehensive about having his English teacher be his one and only friend. At lunch he gets rejected to sit with any groups, even the table with his sister. He meets seniors Patrick (Miller) and his half sister Sam (Watson) and they seem to be the only ones to accept him. Patrick is an extroverted out gay man who is not afraid to be who is he is despite what his fellow classmates think about him. Sam is another outsider even though she is sweet, fun, and has great taste in music. 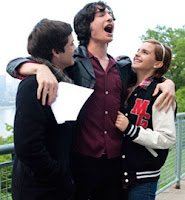 The rest of freshman year seems to treat Charlie fairly well. He starts to feel more comfortable with himself thanks to being welcomed by Patrick, Sam, and the rest of their clan. They form a tight bond and keep each other sane and grounded. They participate in live action midnight screenings of The Rocky Horror Picture Show, exchange Secret Santa gifts, drink, experiment with pot, and have mindless games of Truth or Dare. Charlie continues to be challenged by Mr. Anderson as he exchanges books with him opening his mind to the likes of “Walden”,”The Catcher in the Rye”, and “The Great Gatsby”. Even with all the good around him, Charlie cannot fully escape the past as memories of Aunt Helen still linger and sit with him. 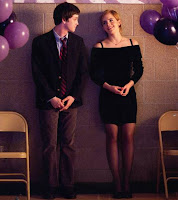 It may seem like your standard teen flick, but rest assured there is so much more behind it. This is not a story about angst-filled, whiny teens complaining about their lives. There is a depth and honesty to it that we don’t always see with these types of movies or television shows on the CW. Chbosky has written and directed the movie based on his own book. Rarely do we see an author write and direct a film adaptation of one of their works. The script is full of sharp dialogue and witty humor perfectly matching the tone and mood of each of the characters. Many of your standard teen sagas can often seem trite and boring with unbelievable characters. They are either too rich, too smart, or too dumb for their own good. Chbosky’s characters feel like they are real people. They feel like friends I had in high school. With great characters comes great performances. Ezra Miller gives Patrick a good mix of exuberance and flamboyancy without feeling like your typical gay movie teen. He is proving to be a stellar young actor with this and his phenomenal portrayal as the title character in last year’s We Need to Talk About Kevin. The Perks of Being a Wallflower may not be everyone’s type of movie but it definitely had a lasting impression on me. If you have ever felt like a wallflower yourself, I think you will feel touched as well. It is one of my favorite movies of the year so far.