I am a sucker for a good crime story that has some mystery and suspense, and more importantly, brains behind it. I am right there trying to solve it along the way. As two men drive around on a hot summer day, they see an innocent girl biking alone near a field. When you see Peer (Thomsen) and Timo (Möhring) put the car in reverse and go after the girl, you know what it will come next. Peer rapes and accidentally kills the girl as Timo waits in the passenger seat. Peer wraps the body and dumps it in the lake and they proceed to carry on with the rest of their day. Timo seems to be shaken and disturbed by the event.

Twenty-three years pass and the crime was never solved. The girl’s body was never found and the police never caught the killer. A cross with the name “Pia” still stands at the sight as a memorial. Pia’s mother (Sass) replaces the flowers on a consistent basis. On the anniversary of Pia’s death, another girl goes missing from the exact same location and the crime appears to be a copycat of the original crime. Both cases are now being investigated in hopes to find the killers. Timo has not been able to fully move on since he was an accomplice to Pia’s death. He had changed his name, got married, and has two children. The news of another girl being killed sends him over the edge.

Ever since The Girl with the Dragon Tattoo trilogy, European thrillers are becoming more popular. Too many American crime stories are all shock with hokey twists and turns. All games and gimmicks trying to be different. I have seen enough of those types of movies to know the ending during the first act. What I appreciate about The Silence is the style and realistic, believable approach they took with the story. There is still the mystery of who killed Sinikka, the second girl, but the focus is on the character study. We delve into the lives of these characters and how they have been affected by a tragic crime. Between the investigators, Pia’s mother, and the family of the newly missing girl, you witness a variety of responses and reactions on how people deal and cope with two traumatic crimes that have and will forever affect their lives. The remorse and build up inside of Timo is coming to head as he has to deal with his past and how it could drastically affect his family. Meanwhile, Peer still lives in town and is a care taker for an apartment complex. The residents seem to think of him as a nice guy but have no idea of his past and current hobbies. 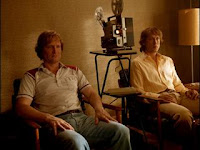 Spring tends to be the time of year when clunker after clunker is released. It is refreshing to see something different. If you don’t mind reading subtitles, this German thriller should not be overlooked for some 3D action flick or some dopey comedy. The movie is beautifully shot with with many aerial shots of the town which reminded me of the opening of The Shining. There are some darker, more disturbing moments but it is never too gruesome or exploitative. Like any good mystery, it will keep you talking and discussing the film afterwards. It may not be at the top of your “to-see” list but you will not be disappointed in trying something new if you do see it. RATING: **** (4 out of 5 stars)