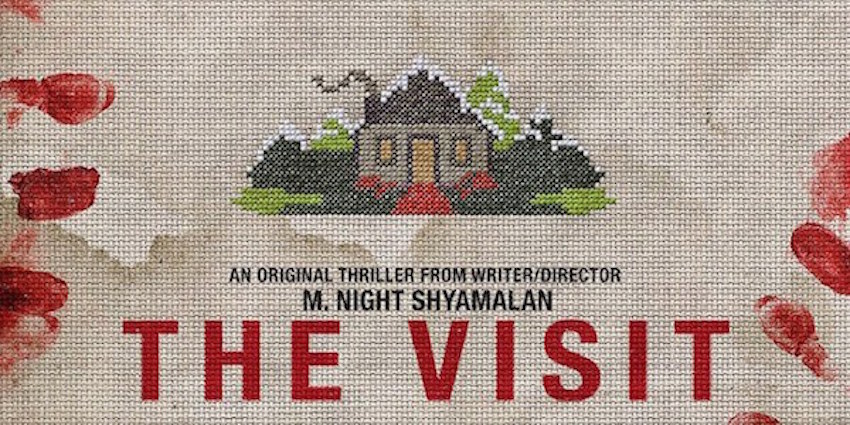 M. Night Shyamalan is back and returning to his horror roots with The Visit. He uses a found footage/documentary style approach about two young kids, Becca (DeJonge) and Tyler (Oxenbould), who go and visit their grandparents for the weekend. Their mom (Hahn) stopped talking to her parents many years ago, so this is the first time the kids are meeting them. Becca is fifteen and an aspiring filmmaker who is documenting their whole week away. Tyler helps out but would rather rap and ham it up for the camera than care about her cinematic standards. Shortly after they arrive in the quaint town of Masonville, PA, they realize not all is well with Nana (Dunagan) and Pop Pop (McRobbie). They catch Nana doing crazy things in the middle of the night due to having Sundowning Syndrome, and Pop Pop has mysterious trips out to the shed. Plus, they are told to never come out of their room after 9:30. I’m going to stop right there as I’m not about to spoil anything else that happens.

The Visit is a low budget, self-financed film from Shyamalan. He bolted onto the scene with 1999’s The Sixth Sense, which led to multiple Oscar nominations and had a string of hits afterwards including Signs, Unbreakable, and The Village. He is known for an intriguing premise and his endings usually came with a twist. Audiences grew leery after awhile as his films grew absurd and started to tank. He even tried switching genres with The Last Airbender and After Earth but audiences stayed away. It’s with great pleasure to say that The Visit is a great return to form for him as he’s going back to his horror roots. Yes, there is even that twist ending. His story is told solely through the perspective of these two kids. He plays on the fears kids have of spending the night in a foreign place with creaky walls, the idea of being away from your parents, and the fear of having old and creepy grandparents. He toys with the idea that maybe the grandparents are weird and scary or maybe that’s just how the kids perceive them to be as this isn’t the lifestyle they are used to living in the big city with their mom.

The focus is helped by Shyamalan using the found footage style. I’ve grown sick of this concept as it literally has been used to death in the horror genre. Low and behold, it works well here and feels a little bit like The Blair Witch Project. The cinematography feels spot on for accuracy for what the camera is catching in action depending on how the kids are using it. Unlike some movies, it’s actually incorporated into this plot, and it’s natural for Becca and Tyler to have two cameras going most of the time. It’s also natural for other characters to address the camera. There are some humorous moments when a couple of characters start off their documentary interview with, “I used to be an actor.”

Shyamalan keeps himself in check and knows what kind of movie he is trying to make. It’s surprisingly funny and juxtaposes well in between the scarier moments. Young Ed Oxenbould, who people may remember as the title character in Alexander and the Terrible, Horrible, No Good, Very Bad Day, is an absolute riot. I bet we’ll see a lot more from him in the years to come. It’s very evident that Deanna Dunagan and Peter McRobbie are having a blast as Nana and Pop Pop, respectively. They both come from very dramatic backgrounds, so it’s fun to see them let loose and play the crazy grandparents. Kathryn Hahn (This is Where I Leave You) brings comedic warmth to the mom role even though she’s mainly seen through Skype sessions.

I love a good low budget horror movie that feels a bit realistic. The director at hand has to rely more on the natural elements and good old-fashioned film making to produce the scares. So many genre films fall back on CGI to create demons, possession, or blood effects that it loses any appeal. I’m glad Shyamalan stuck to his guns to gain more creative control and went back to basics for The Visit. Sure, it’s may not be as cinematic or original like The Sixth Sense or some of his other movies, but it doesn’t need to be. He needed to remind us of what he was known for and that he could create better films than his last few. It’s a spooky fun time that will make you jump, laugh when you’ve been tricked, groan at the gross-out moments, but won’t give you raging nightmares when you go home from the theater.

Is It Worth Your Trip to the Movies? This is the M.Night I love and have missed. Here’s hoping we get more like The Visit.