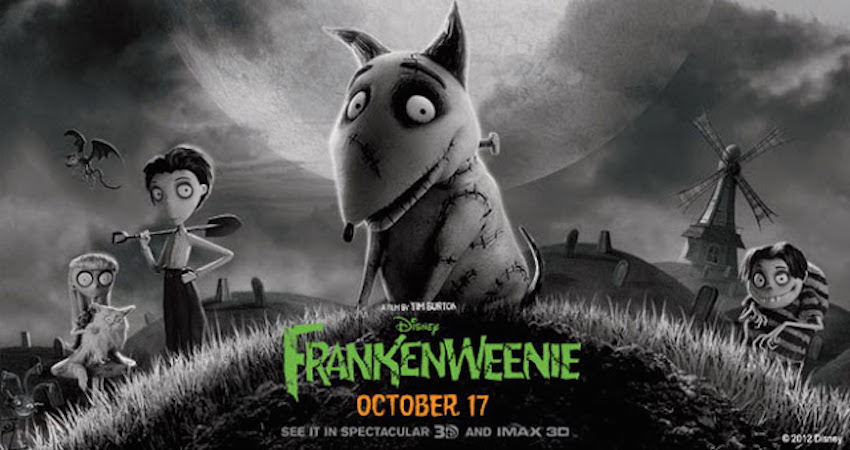 Dogs are widely known as man’s best friend. This couldn’t be truer for Victor Frankenstein (Tahan) and his dog Sparky. He is a smart, but unpopular, kid who has no friends. He spends his past time playing with his dog and working in his homemade lab in his parents’ attic. A weird girl (O’Hara) in class gives Victor a warning that something major is going to happen to him according to the psychic premonitions that her cat gives her. During a night out playing baseball, Sparky gets super excited and chases after Victor’s ball but is run over by an oncoming car and is killed instantly. Victor is devastated about losing his one and only friend. A light bulb goes off for him one day in science class when they learn about electricity. During a heavy thunderstorm, he hooks Sparky up to many bolts, wires, and kites to use the lightening as his spark. Sure enough, it works and Sparky “is aliiiivve.” Victor is shocked and excited to have his best friend back but soon his big secret becomes widely known in his small neighborhood.

Not all Halloween movies have to involve screaming teens running away from some crazy psycho killer. Nor do they have to involve torture porn. There are plenty of fun movies for families to enjoy on Halloween night. Films like Hocus Pocus and The Nightmare Before Christmas have become staples this time of year. Frankly, I watch Hocus Pocus all year round. Frankenweenie is a fantastic addition to add to that lineup if you’re doing a family marathon night. It’s the latest stop-motion animation film from director Tim Burton. It’s similar to his previous films The Nightmare Before Christmas and Corpse Bride, but this film is in black and white, but like the original James Whale/Boris Karloff Frankenstein from 1931.

Burton has had some dismal movies over the last decade resorting to adaptations like Dark Shadows and Alice in Wonderland. I think he works best when the creation comes from his own ideas. He based this film on a live action short he made 28 years before starring Shelley Duvall. She’s nowhere to be found here, but it includes some of Burton’s favorites including: Catherine O’Hara, Winona Ryder, Martin Landau, and Martin Short who all do fantastic voice over work. Danny Elfman is back with a score that reminds us of the beautiful score he wrote for Edward Scissorhands. It’s a nice return to the look and feel of the classic Burton movies that I grew up on like Scissorhands and Batman movies and pays homage to the old creature features. It’s the best Tim Burton film in the last decade since Big Fish. It’s easily enjoyable for adults as well as kids, but may be too scary for wee little children.

You can find it available to rent through Xfinity OnDemand for $3.99, iTunes for $4.99, and it’s usually a part of ABC Family’s countdown to Halloween.

Is It Worth Your Trip to the Movies? It’s a wonderful Halloween treat for the whole family to enjoy after a night of trick or treating.