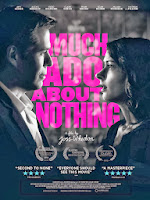 Buffy. Angel. The Avengers. Shakespeare? Of course! I do not think many people expected a Shakespeare adaptation as Whedon’s follow-up to Marvel’s The Avengers. Maybe the die-hard Whedonites who track his every move were aware of his love of Shakespeare. Preparations are in order for a masquerade that evening at the house of Leonato (Gregg). Upon the arrival of Benedick (Denisof), Beatrice (Acker) seems to be the only one less than enthused by his visit. A sharp throw of words between the two ensues. His friend Claudio (Kranz) seems to have an eye for Leonato’s daughter Hero (Morgese) but assumes Benedick would throw himself at her. He reminds them that he is forever the bachelor. The jabs Beatrice throws at Benedick continue that night at the party. He vows to get revenge on her for judging him so poorly and calling him “The Prince’s Jester”.

The next morning Claudio gets the nerve to profess his love to Hero. Their other friend Don Pedro conceives of a plan to bring Benedick and Beatrice together in affection with the help of Leonato, Hero, and Claudio. When Benedick overhears Leonato, Claudio, and Don Pedro discussing Beatrice’s “true” feelings for him, he is befuddled at the news. It is not long when Beatrice hears Hero and the maid Ursula converse about his “true” feelings for her. “What fire is in my ears?” asks Beatrice after hearing this news. At the wedding of Claudio and Hero, the work of the sinister Don John threatens all four of our lovers.

Whedon and some of his frequent actors sat around on Sundays doing readings of Shakespeare’s plays. After doing “Much Ado About Nothing” with Acker and Denisof, he knew that if they were to make a movie out of any of them it would be that play with these two actors. At first I was apprehensive toward Denisof. He seemed a bit stale and one noted in the first few scenes. He completely won me over once he receives news that Beatrice “loves” him. His comedic abilities come out as he fumbles around outside trying to stay unnoticed. Acker and Denisof are a fantastic dueling pair with the infamous Benedick/Beatrice jabs. The majority of the cast are frequent Whedon collaborators and I think that familiarity and comfortable setting helps them feel a bit more at ease with the language and characters. The contemporary setting and design play a factor in that as well. Clark Gregg feels right at home with the language and character as Leonato. Nathan Fillion is another standout as Dogberry, an over-the-top boss of the night watch crew assigned to the evening’s events.

I always love when contemporary films are shown in black and white. It works well with the chic look and design of the parties seen throughout. There is an eloquent and timeless feel it adds to the story. Cinematographer Jay Hunter shoots a majority of the film on hand held cameras and has stated his inspiration came from the French new wave films of Goddard and Truffaut. Whedon and his wife/producer Kai Cole filmed the whole movie in twelve days at their home in California. It is a beautiful property which serves as a nice backdrop for the wedding scene.

Maybe it’s the actor in me, but I have a soft spot for Shakespeare. There is a bit of trepidation whenever directors try to take a different twist to one of his classics or try to set it in a contemporary setting. I still think the “Othello” inspired O with Julia Stiles and Josh Hartnett from 2001 was one of the worst adaptations I have seen on the big screen. For their first attempt at Shakespeare, Whedon and his talented cast have hit it out of the ballpark with the simple, yet effective, contemporary take on one of the Bard’s best comedies. Truth be told, I haven’t read “Much Ado About Nothing” nor seen the staged version in many years so I was able to go in pretty fresh. I would love to see Whedon and his cast take on more iambic pentameter with another adaptation. I don’t think they would all work in this setting and style, but I would be curious to see which one they tackle next.