“It was funny, I was calling you from that phonebox over there and he was telling me you’d left and I was staring at your car – isn’t that funny.”

Last summer I spent a week in small town Minnesota visiting my fiancé while he was performing in “Gilligan’s Island” for the local townies. I found a weird joy about feeling secluded in a dark rustic cabin. Call me crazy, I know, but I was relishing in being away from work. I love thrillers and horror movies, so I thought it would be fun to watch an oldie from that genre. Does that make me a glutton for punishment? I find the majority of recent horrors like the Saw and the Hostel series to be so over-the-top that they don’t make me jump or feel frightened in the least bit. The 1970s provided us with some great thrillers that are shocking and timeless. Movies like Don’t Look Now, The Exorcist, Carrie, Halloween, and The Omen are still watched time after time without ever feeling old or boring. This felt like the perfect night to delve into a thriller that was both vintage and something I had not seen before. 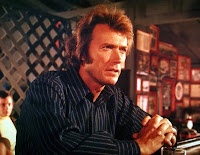 Sometimes listening to jazz on the radio can be a perfect way to relax after a long day. Add in a disc jockey with a smooth, calm, and relaxing voice and you have the perfect solution for a long drive or a late night. Evelyn Draper (Walter) has found that perfect disc jockey. Dave Garver (Eastwood) is the late night host of smooth jazz KRML in Carmel, California. Every night a mysterious female calls into his show and requests “Misty” by Erroll Garner. She never leaves her name, but Dave always plays that song for her. On most nights after his shift, Dave pops in to his local pub. He notices a strange woman staring at him one night. They strike up conversation and mentions to her that he knows her from some place but can’t place it. Evelyn admits to knowing him and specifically went to the bar to meet him. Dave realizes she must be a fan and then connects the dots that she is the woman behind the voice that always asks him to play “Misty”. He agrees to take her home and sleeps with her. 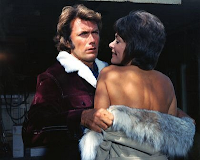 In his mind, it was a one night stand to please a fan. In her mind, it was an invitation to a long-lasting relationship. She shows up at his door the next day unannounced with an arm full of groceries. This is just the beginning as Evelyn snowballs from cutesy and funny to deadly serious in her attempts to enter his life for good. Just as Dave is trying to make his life uncomplicated, Evelyn makes his it a living hell.

Throughout the movie, I kept thinking how perfect Jessica Walter is at playing this type of fanatic stalker. You never know how far Evelyn will go in her attempts to win Dave’s affection. At times it becomes quite jaw dropping. Walter is flawless at playing the various angles of a stalker without playing into camp or veering into over-the-top territory. She stays grounded and truthful and really shows that Evelyn firmly believes in everything she does and sees no problem with her actions. Walter went on to receive a Golden Globe nomination for the film.

I came across Play Misty for Me back in my Barnes & Noble days. I really like the work of Clint Eastwood, both as an actor and as a director, and put this on my never ending “must watch” list. It was a departure for Eastwood from the spaghetti westerns he was known for, like the Man with No Name Trilogy. Eastwood made the choice to make this movie as his directorial debut. For being his first time behind the camera and switching genres, Eastwood makes a crisp, dark, edge-of-your-seat thriller. The studio originally wanted Lee Remick in the lead female role, but Eastwood saw Jessica Walter in Sidney Lumet’s The Group and wanted to cast her instead. Kudos to Eastwood for sticking to his gut and picking such a fierce actress and gripping film for his directorial debut.