Do you ever have a movie that you have been meaning to sit down and watch, but it always slips through the cracks? It always gets put on the back burner to some crappy new release or some other movie you have seen 800 times. Why is that? I had heard about The Last Picture Show years ago and put it on my “I must see that movie” list. Time passed and I never watched it. Jeff Bridges won an Oscar in 2010 for his magnificent performance in Crazy Heart. At the time, I was looking at his filmography and The Last Picture Show popped up as an early entry in his canon. I was reminded yet again that I needed to watch it. It was on sale for super cheap at Barnes & Noble, so I figured if I bought it that would prompt a viewing. Time passed again without me popping open the case. Was there always some other movie I wanted to watch more? My friend Max had watched it for his movie blog as it appears on the AFI Top 100 list. Again, I felt the dire urge to watch it when I read his opinions about it. That was a couple of months ago.

I had been feeling pretty nostalgic lately. There is something to be said about coming of age movies or revisiting movies and TV shows you watched as a young teenager. The Last Picture Show popped up on an episode of “Dawson’s Creek” that I had watched recently, and it perked my interest yet again. I was going to go crazy if I didn’t just sit down and watch it. All these signs were pointing me to watch it. A couple of weeks ago, I had a night to myself so I popped it in. I think I will be forever happy I made that decision. It is one of those movies that just sticks with you. I found myself haunted by it. I would find myself bored work and would start thinking about those characters. I checked in with Max and we had a good chat about it one night. I have watched it twice now before writing this blog entry and I could easily watch it again and again. There is always something new to pick up with each viewing of this classic. Movies become classics for a reason. 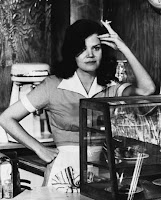 Based on the novel by Larry McMurtry, The Last Picture Show is a coming of age movie set in the deserted, desolate town of Anarene, Texas in 1951. Duane (Bridges), Sonny (Bottoms), and Jacy (Sheperd) lie at the heart of the story. They are seniors in high school not wanting to face the reality of what will come after graduation. Anarene is a pretty empty town. There isn’t a thriving job market of endless possibilities. Duane and Sonny are best friends and Jacy is Duane’s girlfriend. The film follows their lives in their final year of high school and how they decide to deal with the fact that are not getting any younger.

Sexuality plays a huge factor in their lives, especially for Jacy. She is the beautiful model blonde that gets all of the boy’s attention. Duane is the hot stud, so one would think their relationship would be the ideal fit. Duane seems to be sexually frustrated. He and Jacy try to fool around, but he crumbles under the pressure. Jacy is pretty desperate to lose her virginity. After Lester (Quaid) puts the moves on her, she agrees to go to a skinny dipping party with him leaving Duane behind. At the pool party, she meets Bobby and starts flirting with him. He tells her he is not interested in her as she is still a virgin.

Sonny doesn’t have a girlfriend but he strikes up an interesting relationship with the much older Ruth (Leachman). She is in a miserable marriage to the boy’s basketball coach. She is about as fragile as an egg often times breaking down in tears. He takes pity on her and they begin to partake in a romantic relationship thinking that will make them both feel wanted and loved. They share a private kiss behind the restaurant hoping not to get caught. Their first time having sex is awkward and uncomfortable. He doesn’t seem to be enjoying it, and she stars to cry. Ruth says to Sonny, “I can’t seem to do anything without crying about it.” 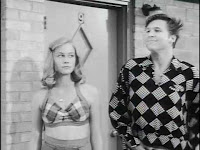 Duane and Jacy carry on their relationship only to be continually plagued down by their sexual experiences. Duane tries to act like the tough guy. They go to a motel to finally have sex for the first time, but he backs down as he can’t perform. She finally loses her virginity after their second attempt. Now that she’s no longer a virgin, she breaks up with him over the phone and tries to go back to Bobby who has since eloped with another girl. Feeling like he has nothing without Jacy, Duane joins the Army and leaves town.

One key member of town is Sam the Lion (Johnson). Sam the Lion is probably one of the oldest residents of Anarene and acts as the moral compass for many of our younger characters. He always seems to have the right answers to any of life’s outstanding questions. He runs the pool hall, cafe, and The Royal Picture Show. There is a beautiful scene with Sonny, Billy, and Sam rolling cigarettes down by the river. Sam gives a sincere and honest monologue about how the town has changed and a fling he had with a beautiful but married girl done there at the river. Sonny seems enthralled with Sam’s story. Sam dies of a stroke and the residences of the town seem to be in disarray. Mrs. Mosey is forced to close The Royal Picture Show with the rise in baseball and the popularity of television. She thinks Sam could have kept it alive and running. “Won’t be much else to do in town when the picture show closes”, says Duane. The movies seem to be the only escape some of these guys have into a different life or world.

The Last Picture Show is one of Bogdanovich’s earliest movies. In a featurette on the DVD, Bogdanovich explains the reason why he chose to have the movie in black and white. He states the film “needed a hardness and density that you don’t get in color” He uses mainly close up eye level camera shots which gives an intimate look at these characters. Each one is flawed and seems stuck in life. No one seems to be all that happy, but at the same time they do not really know how to move forward in a successful way. After Jacy dumps Duane, he leaves town but comes back. Jacy seems to move from guy to guy desperately looking to feeling wanted by someone. Sonny seeks solace in an older woman who is also lost in life. Their only temporary escape seems to be at the movie theater, but that must come to an end once Sam the Lion passes away. This was the first movie for Cybill Sheperd and the second for Timothy Bottoms. Jeff Bridges had done some television work but this was very early on in his career as well. They all give fantastic performances. You clearly know and understand their character’s inner struggles. Ben Johnson and Cloris Leachman both won much deserved Oscars for their performances. Bogdanovich reveals that Johnson was not too keen on taking the part. It took a lot of convincing as Johnson thought the role had too many lines. Bogdanovich told Johnson he would win an Oscar if he took the part and that is exactly what happened. Another interesting casting note involves Ellen Burstyn. She was pretty keen on playing Lois, Jacy’s mom. Bogdanovich made her read for the Cloris Leachman role and the Eileen Brennan role. After hearing her read all three roles, he was convinced she could play any of them let and he let her decide which role she wanted. She naturally picked Lois. The movie went on to garner eight Oscar nominations but it only won two for Johnson and Leachman. It lost Best Picture to The French Connection. It also ranks as #95 on the AFI All Time 100 Greatest Movies list. If you’re looking for something different to watch or want to reflect on a classic piece of American cinema, you can’t go wrong with The Last Picture Show.