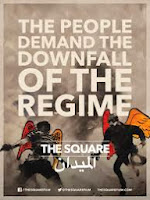 I must say, I am really learning a lot about current events after watching some of this year’s Oscar nominees for Best Documentary. First Dirty Wars and now The Square which brings us right into the forefront of what has been all over the headlines in the past few years. You’re supposed to learn about the news through movies, right? What a splendid idea as I am not up to date on what has been happening on CNN or what’s printed in my local paper. In 2011, a revolution was starting in Cairo, Egypt to overthrow President Mubarak from power. Local citizens flocked to Tahrir Square in the heart of the city for protests, demonstrations, and sit-ins for their voice to be heard. The people came together as one unit without any division of religion in order to obtain freedom from the regime. On February 11, 2011, fireworks went off as the people won their fight when President Mubarak stepped down as their leader.

Unfortunately for them, that was only the first step in a struggle spanning the years since Mubarak left. Despite leaving power, his regime was still in place and the Armed Forces took over without any chance of change occurring. The same revolutionaries marched back into Tahrir Square knowing their work was long from over. Thousands of protestors were arrested and put on trial. One woman states, “The army consistently lied, tortured us.” Even after President Morsi took power, the situation only grew worse. The number of citizens demanding change went from the first few hundreds in the Square at the beginning toward the millions that marched on the one year anniversary of President Morsi’s win.

Director Jehane Noujaim is an Egyptian American herself and brings an inside look at what is happening in the country where she was raised. She interviews six revolutionaries, including actor Khalid Abdalla (The Kite Runner, United 93), young storyteller Ahmed Hassan, and singer/songwriter Ramy Essam and follows their journeys and fights for freedom against Egyptian rule. Noujaim offers a frontline view taking the audience deep into the action as she shoots the majority of footage inside the middle of Tahrir Square. There are some horrific images as people are left injured and even dead after the their own police and army stepped in and turned it into a war. On the contrary, the aerial shots of the swarms of people gathered in the streets are jaw-dropping and inspiring to see that sort of drive, ambition, and sense of community. It should be noted that the majority of the film is in the native language of Egyptian Arabic with English subtitles shown below.

According to Ahmed, there was injustice and indignity and no hope for a better future. When you watch the cable news programs covering events like this, you don’t always get that personal connection. You typically get an outsider’s perspective looking in and reporting from afar. Noujaim’s probing look and personal accounts with her subjects are thought provoking and insightful as you are in the middle of the action yourself. I would not consider this my favorite of the four nominees I have seen as 20 Feet from Stardom still holds that title. Each one has been enlightening and is a testimony to the strength of this genre. Sometimes you watch a documentary and you just feel pelted and beaten over the head with the same point being driven home over and over again. I’m looking at you, Food, Inc.. Luckily the four nominees I have covered so far offer us a variety of topics in an insightful manner with food for thought to ponder over for days to come afterward. Who knows, maybe I will start to pay more attention to the news to keep abreast of these situations. I should probably expand my focus past the pop culture section.

Is it worth your trip to the movies? YES.