Movie Trailer: THE PLACE BEYOND THE PINES

If you saw Blue Valentine in 2010, you know the work of director Derek Cianfrance. He reunites with Ryan Gosling to bring you another intense character study. Gosling plays Luke Glanton, a motorcycle stunt rider that turns to bank robbery in effort to provide for his son and ex-girlfriend Romina (Mendes), who is the mother of his child. Luke’s actions come to the attention of rookie cop Avery (Cooper) and the even more corrupt Detective Deluca (Liotta).

The film premiered at the Toronto Film Festival in 2012 and received rave reviews. Cooper is shining right now with Silver Linings Playbook, so I predict another stellar performance to keep his momentum going. Gosling can currently be seen in Gangster Squad and was recently the People Magazine cover man. Blue Valentine really got to me, so I am highly looking forward to another emotional punch to the gut with The Place Beyond the Pines. 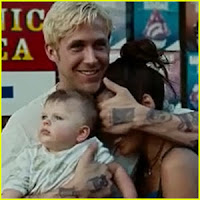