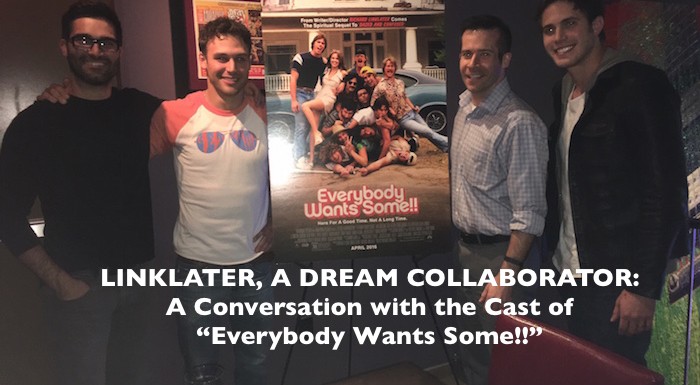 LINKLATER, A DREAM COLLABORATOR: A Conversation with the Cast of “Everybody Wants Some!!” It’s not hard to watch a Richard Linklater film and fall in love with his style and characters. Whether he’s making a romantic trilogy, following a bunch of stoners on the last day of school, or taking twelve years to show a young boy grow up, Linklater presents that slice of life that we can all relate to in some fashion or another. His new film, Everybody Wants Some!!, is considered the “spiritual sequel” to his breakout cult film Dazed and Confused. It’s a wonderful look back at those three days leading END_OF_DOCUMENT_TOKEN_TO_BE_REPLACED

EVERYBODY WANTS SOME!! Writer/Director: Richard Linklater Starring: Blake Jenner, Tyler Hoechlin, Ryan Guzman, Justin Street, Wyatt Russell, Glen Powell, Temple Baker, J. Quinton Johnson, Will Brittain You may remember me obsessing over Richard Linklater’s previous film Boyhood when it arrived in theaters in 2014 and became a big awards season contender. I also highlighted his film Dazed and Confused as part of my Criterion Collection series. His latest film, Everybody Wants Some!!, is considered the “spiritual sequel” to Dazed. No, we’re not seeing what happened to the characters previously played by Matthew McConaughey or Ben Affleck. Linklater has chosen a whole new cast of up END_OF_DOCUMENT_TOKEN_TO_BE_REPLACED