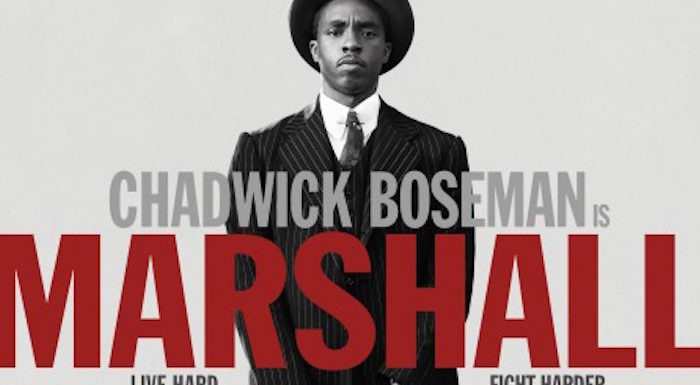 MARSHALL Director: Reginald Hudlin Starring: Chadwick Boseman, Josh Gad, Sterling K. Brown, James Cromwell, Dan Stevens, Kate Hudson, Keesha Sharp, John Magaro, Jussie Smollett, Rozonda ‘Chilli’ Thomas Chadwick Boseman seems to be your go-to-guy for playing historical figures. Most people probably just know him as Black Panther from Captain America: Civil War. This is his third biopic after playing Jackie Robinson in 42 and James Brown in Get on Up. In 1941, Thurgood Marshall was the sole lawyer for the NAACP. He was brought on to defend many African Americans on trial as he was a champion at what he did for those that never END_OF_DOCUMENT_TOKEN_TO_BE_REPLACED

CAPTAIN AMERICA: CIVIL WAR Director: Anthony Russo, Joe Russo Starring: Chris Evans, Robert Downey Jr, Scarlett Johansson, Sebastian Stan, Anthony Mackie, Elizabeth Olsen, Don Cheadle, Jeremy Renner, Chadwick Boseman, Paul Rudd, Daniel Brühl, Tom Holland This is the thirteenth film in the Marvel Cinematic Universe. The number 13 is typically an unlucky number for some, yet Marvel is in top form with its third Captain America film. With so many characters it may seem like the next Avengers film, but Captain America/Steve Rogers (Evans) and the relationship he has with best friend Bucky Barnes (Stan) is front and center. Bucky’s known as The Winter Solider END_OF_DOCUMENT_TOKEN_TO_BE_REPLACED

DRAFT DAY Director: Ivan Reitman Starring: Kevin Costner, Jennifer Garner, Denis Leary, Frank Langella, Josh Pence, Chadwick Boseman, Terry Crews, Ellen Burstyn, Arian Foster, Tom Welling 2014 seems to be the year of Kevin Costner. It’s only April and he has already been featured in three releases, though I must admit I didn’t see either Jack Ryan: Shadow Recruit or 3 Days to Kill. I am happy to witness this Costner resurgence – he seemed to have taken a break from acting – since his performance in last year’s Man of Steel was one of that film’s better aspects. We have seen him in numerous END_OF_DOCUMENT_TOKEN_TO_BE_REPLACED