CHERRY Director: Anthony Russo and Joe RussoStarring: Tom Holland, Ciara Bravo, Jack Reynor, Michael Gandolfini, Michael Rispoli, Damon Wayans Jr. Tom Holland leaves his Spider-Man suit behind in his new film Cherry. Holland goes from geeky teen to tormented vet as Cherry. Cherry’s life choices take him from one tragic move to the next. His college days were filled with panic attacks, turbulent relationships, and no money. He decides to join the Army as a medic after eloping with his girlfriend Emily, played by Ciara Bravo. His days in the army severely damage Cherry leaving him with horrible PTSD followed by drug addiction and string END_OF_DOCUMENT_TOKEN_TO_BE_REPLACED 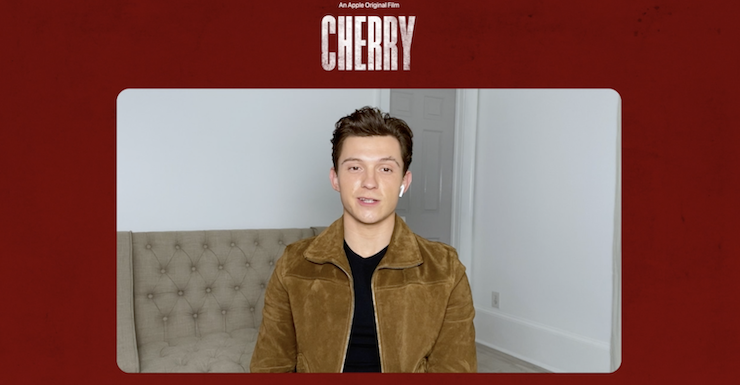 Tom Holland Interview – CHERRY At home interviews don’t quite go to plan when technology and internet problems strike at the worst times. Despite that those hiccups, I sat down with Tom Holland to talk about his new film Cherry now in select theaters and will be on AppleTV+ on March 12. We talk about Tom’s conversations with veterans and addicts, military training and find out what sitcom Tom turns to after a long day of filming. **click SUBSCRIBE for more reviews and interviews** END_OF_DOCUMENT_TOKEN_TO_BE_REPLACED