THE PROM Director: Ryan MurphyStarring: Jo Ellen Pellman, Ariana Debose, Meryl Streep, Nicole Kidman, Andrew Rannells, James Corden, Keegan-Michael Key, Kerry Washington I saw the Broadway musical The Prom in its closing weekend, and the energy from the crowd and its actors was massive. We knew we were watching something special. The movie musical adaption is now streaming on Netflix. For Emma, all she is wants to do is go to the prom with her girlfriend Alyssa. Newcomer Jo Ellen Pellman and Ariana DeBose play the couple in question, but the PTA led by Alyssa’s mother, played by Kerry Washington, decides to shut down the END_OF_DOCUMENT_TOKEN_TO_BE_REPLACED 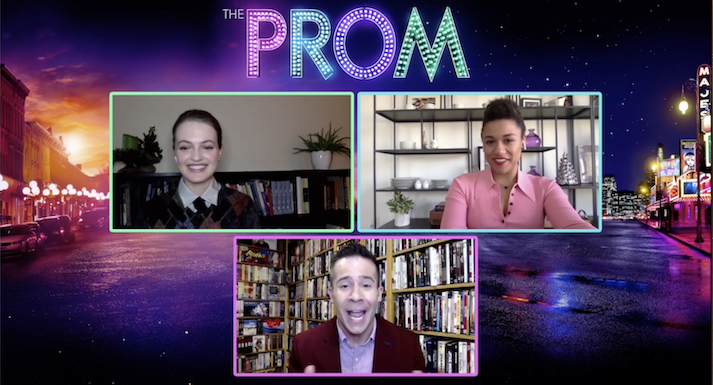 JO ELLEN PELLMAN and ARIANA DEBOSE INTERVIEW – “THE PROM” Jo Ellen Pellman and Ariana DeBose are two young stars on the rise. You will fall in love with their characters in The Prom. It’s the latest stage to screen movie musical that will fill your heart. I sat down with them to talk about acting alongside acting goddess like Meryl Streep, Nicole Kidman, and Kerry Washington, seeing the original Broadway musical, and they share inspiring words for today’s queer youth. “The Prom” streams on Netflix December 11. **click SUBSCRIBE for more reviews and interviews** END_OF_DOCUMENT_TOKEN_TO_BE_REPLACED