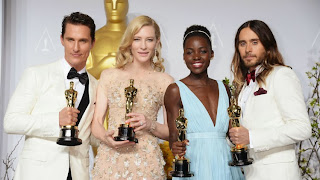 I don’t think there were too many surprises from last night. My final outcome on predictions was 19 out of 24, which wasn’t too bad. I should have stuck to my initial guesses on Best Picture and Best Costume Design, but I thought I would throw out some surprises. 20 Feet from Stardom took the award home for Best Documentary when many thought The Act of Killing had it in the bag. Ellen Degeneres completely nailed the opening monologue and brought an informal approach to her hosting duties, often times delivering bits from the audience. The selfie that broke Twitter was a fantastic idea and takes a bit of the stuffiness out of the room. I’m sure there will be some curmudgeons that will balk at her casual ways, but I found it entertaining. I will say that some of the bits took too long. The Oscars are always far longer than they need to be. I read many negative comments regarding some of the performances. I really enjoyed Bette Midler, Pink, and Idina Menzel. My biggest beef of the evening came with one of their presenters. Can I just throw it out there that John Travolta should not present again? Why does he always have to present one of the Best Song nominees? He completely butchered Idina Menzel’s name. Don’t they have rehearsals and pronunciation cards or something to ensure names are pronounced correctly? Travolta and his hair piece were two of the lowest moments of the evening. Some highlights of the evening include Jared Leto, Lupita Nyong’o and Cate Blachett who had wonderful and inspiring speeches. While Gravity took home the most with seven wins, 12 Years a Slave took home the final award for Best Picture.