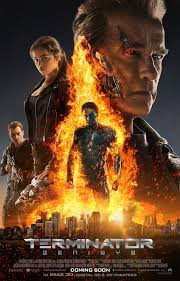 James Cameron made a perfect sequel with 1992’s Terminator 2: Judgment Day. The two films that followed (2003’s Terminator: Rise of the Machines, 2009’s Terminator Salvation) received mainly negative reviews from fans and felt like a deviation from the world he created. This fifth entry had potential to kick things back into high gear by bringing back familiar characters with Sarah Connor (Emilia Clarke), her son John (Jason Clarke), Kyle Reese (Courtney), and our favorite machine, the T-800 (Schwarzenegger). As we know in this universe, Judgment Day wiped out all of mankind, except for a few survivors in an ashy wasteland. The year is 2029 and John is seen as the prophet for being the one strong enough to fight back at the machines and lead a war against SkyNet. SkyNet knows they are losing the battle, so they send one of their terminators back to 1984 in order to kill Sarah before she can give birth to John. John’s move is to send his dad Kyle Reese back to 1984 in order to save her.

The film feels a bit nostalgic in the first fifteen minutes for the 1984 timeline. It’s almost a shot by shot retelling of the first film. It goes completely away from this idea for the rest of the movie. Unfortunately, this sequence only works if you remember the first two movies pretty well as the T-1000 (Lee) also pops up for some fun. All of a sudden the timelines start to shift as we have an older looking T-800 battling the young one, and Sarah seems to be in tune with what’s going on around her. The story shifts to 2017 when SkyNet is on the verge of taking over the world with their new operating system Genisys. There’s a nation wide countdown in place with over one billion people having pre-ordered the system. Sarah and Kyle travel to the future to try to stop SkyNet once and for all, but John shows up and tries to alter their plans.

If you’re thinking I just gave away a major spoiler, don’t blame me as the trailers already gave this twist away along with a few others. This is just one of my many irritations with this fifth entry. I wholeheartedly hate the idea of John Connor becoming the villain of the movie as it feels like it cheapens the series. John was always someone I rooted for, so why are they rewriting that part of the past/future/history of this universe? It also doesn’t bode well for Jason Clarke who is the fourth actor to take on the would-be-prophet after Edward Furlong (T2), Nick Stahl (T3), and Christian Bale (TS) played him before. It’s also the first time in awhile that I did not enjoy a Jason Clarke performance. He becomes a one-noted drab of a character.

As you can tell, it’s not a new concept for this franchise to have new actors come in to play previous characters. With John Connor there was an age progression, which helped that concept. Filling in for Linda Hamilton’s classic badass, Sarah Connor, is “Game of Thrones” star Emilia Clarke. I’ve never watched the HBO show, so I can only speak for her here and state that she is horribly miscast. I try not to compare how two actors play a role as that’s just unfair and doesn’t respect their individual talents. Due to the fact the story attempts to retell the 1984 timeline, the character needs to be somewhat modeled after what Hamilton brought to the table. I’m not expecting Clarke to copy everything she did, but this Sarah Connor feels completely different than the character fans know and love. Clarke is far too pretty, youthful, and angelic when Sarah should be a bit disheveled, worn, and torn. Hamilton had grit about her that Clarke can’t muster up.

What I still don’t understand is that if they were going to recast everyone else in the movie whether they are man or machine, why did they bring back Arnold Schwarzenegger? I can only come up with the fact that this was purely a casting stunt to bring back the series’ core audience and make it feel like a Terminator film again. It feels completely unnecessary to the point where they actually have to explain why he’s aged over the years and why the look of this Terminator ages throughout this film as well. And still we get no Michael Biehn (the original Kyle Reese) or Linda Hamilton. Schwarzenegger doesn’t bode well in the film either. I don’t know if he feels rusty, forgot how to play the T-800, or if the character’s written terribly in this film. There were times where I thought he was playing a human and actually forgot he is playing a machine.

The writing team of Laeta Kalogridis (Shutter Island) and Patrick Lussier (Drive Angry) try to be funny throwing in many one-liners, but director Alan Taylor (Thor: The Dark World) cannot get any of them to land by his actors. A majority of the humor falls flat. Schwarzenegger is given many of these, one of them being a running gag about smiling, and it’s just awkward. Oh, and he’s called “Pops” by Sarah Connor. Seriously. The only actor to garner a laugh out of me is J.K. Simmons, who was only given a minor part in the film. They also spend far too much time explaining what goes on throughout the movie. No, no just at the beginning, but the actions, consequences, and rules get discussed ad nauseam as if they don’t trust the audience to keep up or they know what they have done to the series doesn’t make sense.

For a big summer blockbuster that probably had a huge budget, it all felt very cheap. There are some horrible wigs and a bad make-up job on Schwarzenegger, which was very apparent in the 2017 scenes. It’s so evident that his prosthetics are rubber that I longed for the days of the first film when it actually looked like he cut into his arm and pulled his skin off. Even the CGI work is lacking. It’s very odd to watch the CGI 1984 Arnold fighting the now-much older 2015 Arnold. It looks so computer generated that’s it’s a bit comical. It’s a shame that barely any of this movie works. The only scene that felt exciting and suspenseful involved the bus flipping over, which again, was given away in the trailers. I went in looking for a fresh return to this franchise in hopes that it would give me the same feelings Jurassic World gave me to that franchise. Now I’m just disappointed and think it’s time to terminate this series.

Is It Worth Your Trip to the Movies? Just go back and do a double feature of the first two instead.