Confession time. Watching Breathless was my first foray into the French New Wave movement. For a critic, it is embarrassing to say that it has taken me this long to watch one of the films of Jean-Luc Godard. Nor have I seen anything of Francois Truffaut. Both Godard and Truffaut are considered pioneers in this groundbreaking approach to filmmaking. From the very beginning of Breathless, you are immediately in tune with the character of Michel Poiccard (Belmondo). He is living in the moment, cigarette in his mouth, and calculating his next plan of attack. He proceeds to steal a car and drives out into the countryside. It’s not long before a cop tracks him down for speeding. Michel sees only one way out of his latest predicament and shoots the officer after being pulled over. He ditches the stolen car and hails a ride to Paris. 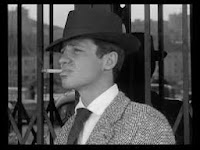 In Paris, he steals money from an actress friend that he knows and tracks down Patricia (Seberg) on the streets of the Champs-Élysées. She is his “New York girl” who is currently spending time in Paris working as a journalist and selling copies of the New York Herald Tribune. She is surprised to see him there, but he tells her that he has enemies there and that someone owes him money. She seems to be clueless about his past and has no idea that his picture is posted in the paper for being the cop killer. He continues to seduce her as he bides some time while hiding from the cops. This naturally involves more car and money theft and deceitful ways of lying so she doesn’t catch on. 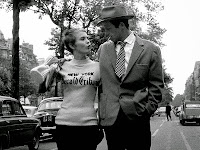 The film rests primarily on these two characters. Belmondo is perfectly cast as Michel. He is unconventionally good looking with an extremely cut torso. He doesn’t have that look you would associate with a killer or someone that doesn’t think twice about knocking someone out in a public bathroom. Michel has a fascination with Humphrey Bogart and attempts to be as suave and charming as his hero. He is never seen without a cigarette in his mouth often using the last of one to light another. At the same time, he is whiny and immature when he doesn’t get his way. Jealousy sets in quickly when he catches Patricia getting cozy with her editor. She also plays hard to get with him as he attempts to persuade her into letting him spend the night. Jean Seberg was quite young and fairly inexperienced when she signed on for the role of Patricia. She seems to teeter back and forth on wanting to be independent but also wanting to feel loved by him. There is an underlying tone of depression that resides in her causing this back and forth emotional ride she forces on Michel. I never got a clear answer on where she is at in life. Maybe that was Godard’s point with her. She seems more mentally unstable than Michel does yet he is the one that kills people for some extra cash in his pockets.

You always hear about the French New Wave and how ground breaking it was at that time. As you watch Breathless, its cinematic achievements may not be as apparent as it doesn’t necessarily feel any different than your average indie film from an up and coming filmmaker. Godard and some of his fellow colleagues were film critics before they turned to directing. They became increasingly dissatisfied with the quality of French cinema at the time with its emphasis on grand and polished craftsmanship. Breathless was Godard’s first film and he threw out very conventional ways of moviemaking. In one of the special features, it is stated that “This was the New Wave: shooting among the crowds in the street.” That is exactly what Godard had in mind. There was no lighting, no sound, and he had a very bare bones approach to it. There were no dollies used for easy camera work. Cinematographer Raoul Coutard shot the entire film on a hand held camera while sitting in a wheel chair or other cart-like contraptions. They shot very long uninterrupted takes which later resulted in the use of “jump cuts” which are very evident as you watch the movie. The jump cuts were conceived of in the editing room as a way to keep up the pace and cut down on the time interval in each scene.

Even Godard’s approach to the script was against the norm. Before Godard came onboard, Truffaut had written a treatment of the story and worked on it with Claude Chabrol. They gave Godard the treatment after they were able to receive financing to get the film made. Godard proceeded to write the dialogue as they were filming it with scenes being written the morning that each scene was going to be shot. Belmondo accepted the part of Michel based on the rough outline and only learned of Michel’s adventures as filming commenced. 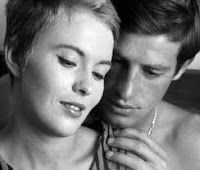 The three-disc Criterion blu-ray release is bursting with special features devoted to the film, Godard, and French New Wave. The high-definition digital transfer is approved by director of photography Raoul Coutard. We have archival interviews with Godard, Belmondo, Seberg, and Jean-Pierre Melville. Interviews form 2007 with Coutard, assistant director Pierre Rissient, and documentarian D. A. Pennebaker. There are two video essays, one on Jean Seberg and another by critic Jonathan Rosenbaum’s on Breathless as film criticism. Chambre 12, Hôtel de sued is an extensive eighty-minute 1993 documentary by Claude Ventura and Xavier Villetard that traces the filming locations and has interviews with various cast and crew. Godard and Belmondo’s short film Charlotte et son Jules from 1989 is included. One of my favorite Criterion features is the booklet that is usually included. The Breathless booklet includes numerous archival interviews plus Truffaut’s treatment and Godard’s scenario of the original story. 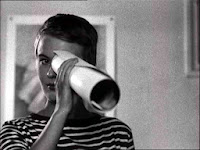 If you are like me and haven’t dipped into the French New Wave pool of films yet, Breathless is a great starting point. I was intrigued to see how long Michel’s charades were going to last and if Patricia would eventually catch onto his act. He tells her a story early on that would seem to the audience that he is outlining his whole plan, but even then she doesn’t catch on. It all culminates to an ending that I did not see coming. I’m glad I finally checked this one off my never ending “to-watch” list. However, more Godard and Truffaut films have now been added onto it. Good thing Criterion Collection offers a plethora of them in their library.

Is It Worth Your Trip to the Movies? Anyone looking to educate themselves in groundbreaking cinema history, look no further.