The guys from the Channel 4 news team are back! It has been nearly a decade since Will Ferrell donned the mustache and fabulous hair as Ron Burgandy. Ron and his talented wife Veronica Corningstone (Applegate) are now co-anchors together and think they are being offered a promotion to the nightly primetime slot after anchor Mack Tannen (Harrison Ford cameo!) calls them into his office. The news does not quite go to plan as Veronica gets the promotion and Ron gets fired. By the hammer of Thor, no one fires Ron Burgandy! Ron does not take the news lightly as he is furious with Veronica and leaves her and their son, Walter, behind and heads back to San Diego. 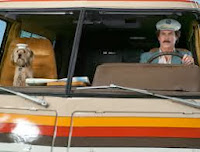 Months pass and Ron is depressed and drowning himself in scotchy scotch scotch. He is approached by Freddie Sharp (Baker) of GNN, Global News Network about a new opportunity to be a part of the first 24-hour news station. He comes aboard and gathers his old crew of sports guy Champ Kind (Koechner), field reporter Brian Fantana (Rudd), and meteorologist Brick Tamland (Carell). Things do not look so bright once they hit headquarters and find out they have been given the graveyard shift time slot while their rival Jack Lime (Marsden) gets the primetime slot.

I will admit here that Anchorman and Elf are the only two Will Ferrell movies that I find are laugh out loud funny upon multiple viewings. On the contrary, I think Step Brothers is one of the dumbest movies ever made. I was so happy when news broke that Ferrell and co-creator Adam McKay would finally write a sequel to their smash hit. Comedy sequels are very hard to do well. They are rarely funnier than the first as the jokes get recycled and the laughs seem forced. The actors seem dull and bored and are only doing it for the easy paycheck. I thought that if any recent comedy could have a successful sequel, it would be Anchorman.

Why why why was I so disappointed? For one thing, the film is way too long. Even though the runtime is only two hours, it still feels long. I think McKay and Ferrell knew the audience would eat up anything they wrote without editing it down or realizing the pacing of many of the scenes. It feels over-stuffed and over-crowded with material that does not always work or works only for a bit. The whole idea behind Ron gathering the old gang takes way too long. Couldn’t we have just done a quick montage or something? Steve Carell’s Brick is expanded into a bigger role and actually given a subplot where he falls in love with the female version of Brick in fellow co-worker Chani (Wiig). I love Wiig and Carell, but all of that is so unnecessary. Part of what makes Brick funny is that he is quieter and the opposite in tone to Ron. The infamous quote “I love lamp” is perfect as it is a short random one-liner. That is what makes Brick funny. Giving him longer lines and a love interest loses the charm and innocence with the character. Brick and Chani just turn annoying after a few minutes. I think the overall story itself would have been fine if it was kept between Ron and the crew versus the Jack Lime character. It could have been simple but funny. Ferrell and McKay added in a boyfriend (Kinnear) for Veronica and a new boss (Good) for Ron to have anger towards. Giving attention to all of these people just makes the film feel bloated. There are some good laughs to be had here and there, but it is not consistent like it was in the first film. We do get treated to another brawl involving all of the local news teams, which is the high point of the film. That whole bit is chock full of celeb cameos.

I really wanted to like this movie. I wanted Ferrell and McKay to prove that comedy sequels can be successful. The first film felt smart and fresh. Here the laughs just seem stupid and cheap. I do not think my sense of humor has changed as I still find the first one hysterical no matter how many times I watch it. Frankly, I expected a lot more out of it. Maybe I was asking too much for an Anchorman sequel. We basically had a private screening of the film when we saw it as the other group behind us left halfway through. Would I have laughed more if it was a full house laughing their asses off? Maybe. A good comedy should be funny regardless of it is one person watching it alone or hundred people watching it together.