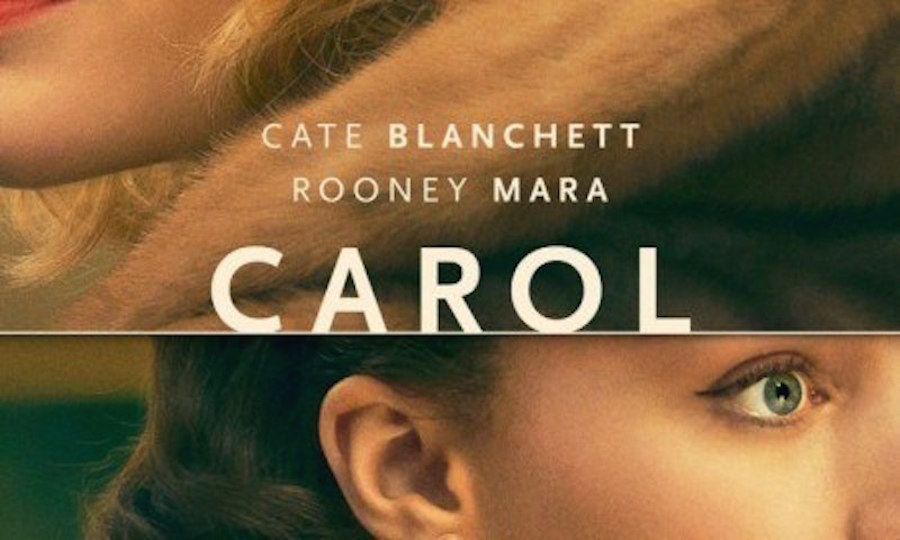 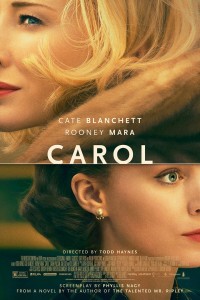 It’s the early 1950s and that snowy and bustling time of the year again as Christmas approaches. For Therese (Mara), that means a busy work season as she is employed in the toy section of a large department store in New York. It’s just a job for her as she finds more joy in being a photographer. One day while working, she spots Carol Aird (Blanchett) who comes into the store looking for a gift for her daughter. There’s an attraction between them right from the beginning. Carol is a high-society woman, dressed to the nines and knows she has power. She flirts with Therese when she asks for help picking out a gift and then purposefully leaves her glove behind on the counter as she leaves. This attraction is a bit unusual for both of them as Therese has a boyfriend (Lacy) who thinks they will one day get married. Carol is going through a divorce from her husband Harge (Chandler). Carol and Therese continue to explore what this new relationship means as it goes against the societal norms. When word starts to leak back to Harge, it becomes a sticking point in Carol’s attempt at gaining custody of their daughter.

Critics and audiences have admired director Todd Haynes (Far From Heaven, Velvet Goldmine) for his depiction of gay and lesbian themes in his films. He typically makes period films as a way to open our eyes and learn about the struggles from those that have come before us. The 1950s provides a vastly different viewpoint on living out and open regarding one’s sexuality. The film has been adapted from the novel The Price of Salt, the second by Patricia Highsmith (Strangers on a Train). Phyllis Nagy’s script gives equal weight to both Therese’s journey as well as Carol’s. It’s a beautiful and tragic discovery all at the same time to watch these two women learn and figure out what this admiration is for each other at a time when homosexuality is taboo and not nearly as accepting as it is in current time.

Haynes has done a remarkable job of bringing the audience into the time period. It’s one thing to watch a period film, but it’s that next level when you feel like the film you are watching was actually made at that time. Haynes and his cinematographer Ed Lachman were inspired by the work of photographer Saul Leiter who brilliantly captured the city, its mood, and the every day person from an outsider’s perspective as if he was just peering into their lives for a moment. There are many shots that put the audience on the other side of a door frame, window, or even further away as we watch and observe what is happening versus putting us right there in the middle of the action. It’s sensory overload in the best possible way. I was in awe of Sandy Powell’s costumes and the rest of the production design that transports you right back in time. They shot it on Super 16mm film versus the now standard digital camera. It gives it that grainy quality that makes everything look a little more distressed and feels a little more authentic and real.

Cate Blanchett is a six time Oscar nominee and has won twice already. One of the previous nominations was her first collaboration with Todd Haynes in I’m Not There. She continues to prove time and time again that she is a master class in acting. Carol is no exception. I was absolutely floored by her performance and how she subtly makes every character completely different without turning in one of those “transformation” types of performances. Carol is unlike any other performance I’ve seen from her. She brings a deep complexity to her and radiates with a husky voice and seductive demeanor, all the while making it this outward appearance that is masking the sadness inside of her.

Rooney Mara gives a performance that is just as demanding and is on par with that of her costar. We see a softer side of her as opposed to the harder bite she gave as Lisbeth Salander in The Girl with the Dragon Tattoo. Mara starts off by giving Therese an innocence and vulnerability and goes into a journey of self-discovery. She’s quite exquisite and cements herself as an actress on a trajectory of having a career like Blanchett’s. They have a wonderful supporting cast around them with Jake Lacy (Girls) and Kyle Chandler (Friday Night Lights) as their significant others, and Sarah Paulson (American Horror Story) as Carol’s best friend.

Todd Haynes has another stunning film under his belt. It’s one of the very best of the year. He transports you right back to a time and place where acceptance and understanding were not welcome. I felt every beat and every moment between Blanchett and Mara as they navigate through Carol and Therese’s relationship.

Is It Worth Your Trip to the Movies? Carol is exceptionally crafted and will lure you in from its first scene up until its last.