Jon Favreau got his big break when he wrote and starred in 1996’s indie hit Swingers. Lately he’s been found in the director’s chair with huge movies like Iron Man, Iron Man 2, and Elf. With Chef, he seems to be returning to his roots by writing, directing, and starring in a film that is far smaller in scale and budget compared to those films.

Favreau sharpens his knife skills as Carl Casper, the head chef at a fine dining restaurant. Carl is starting to lose his creative edge after having to cook the same menu for the last ten years. When a famed foodie blogger (Platt) decides to review the restaurant, Carl wants to try a new menu to liven the place up. The restaurant’s owner (Hoffman) forbids him from changing the menu as this is the menu the customers come to the restaurant for. They don’t come for culinary experiments or highbrow tricks. Carl abides and cooks the standard menu with the help of his sous chef (Cannavale) and line chef (Leguizamo). He receives a scathing review and decides to quit his job at the restaurant.

When you have a passion for something, you don’t let one critic ruin it for you. During a trip to Miami with his ex-wife (Vergara) and son, he decides to reinvent his brand and image by starting a food truck selling Cubanos sandwiches. The food truck goes on the road and becomes a bonding experience for him and his son. Carl teaches him about food, cooking, and living out your passion in life.

Sometimes when you watch a foodie movie, it can be quite apparent if the actors don’t really know how to cook or if they aren’t believable as chefs. Favreau looks quite comfortable with his chef’s apron and knives. He trained under Chef Roy Choi who also served as the inspiration behind the story. He is thought of as one of the founders of the food truck movement. Foodies will love all of the scrumptious shots of all of the food used throughout the movie. I love to cook and bake, so I had audible gasps numerous times and promptly wanted to cook when I got home.

There’s more to the story than just a passionate chef who takes his job seriously. There is a father/son element to it that was really endearing. I give kudos to Favreau for not making Carl a deadbeat dad. So many times when we see a divorced couple that share custody of their child, the dad is usually some loser who can’t take care of the kid, shows up late, forgets a birthday, etc…Carl makes mistakes at times, but there is no denying that he loves his kid. This element of the plot really comes into play when Carl takes his son on the road trip to get the food truck off and running. The film also provides an interesting commentary on the power of social media and the power it has over a business, brand, and image. I wouldn’t be surprised if Twitter and Vine were sponsors of the film for how often they come up in the movie and the impact they have on Carl’s businesses. 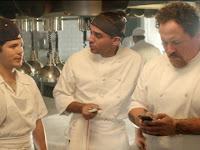 The movie is a bit too long and could have trimmed the fat at times. There are many transitional scenes and moments that are unnecessary, especially in the third act once we get into the traveling food truck portion of the story. This tends to happen when people pull double or even triple duty if they are acting, directing, and writing the movie. A good editor needs to come in with a fresh eye. Despite that, Favreau has a wonderful supporting ensemble, many of which he has worked with before. Scarlett Johansson pops up as the restaurant’s waitress. Amy Sedaris is as funny as always in a scene-stealing role as Sofia Vergara’s publicist that could help get Favreau’s career back on track. Favreau’s buddy Robert Downey, Jr even cameos as Vergara’s ex-husband. It’s one of those smaller films that doesn’t have a huge marketing budget and relies on good word of mouth to get people to see it. I hope it becomes a little sleeper hit that doesn’t get lost amongst all of the huge blockbusters that are out. It’s an endearing film for those that couldn’t care less for those superhero movies out there.

Is it worth your trip to the movies? Anyone that loves to cook will enjoy this movie.

2014-05-30
Previous Post: Movie Trailer: THIS IS WHERE I LEAVE YOU
Next Post: Movie Review: A MILLION WAYS TO DIE IN THE WEST